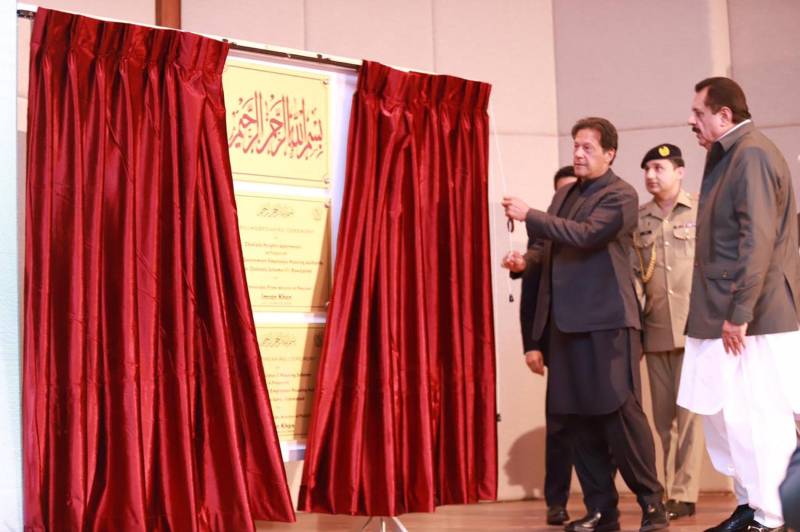 Speaking on the occasion, the prime minister said the government had undertaken huge efforts for the start of constructing five million houses in the country as the initiative often drew criticism from the political opponents.

But now after the breakthrough and path-finding, the journey had started towards realization of that initiative, he added.

The prime minister also expressed his pleasure over the decision of Lahore High Court regarding the foreclosure laws, and said the LHC judgment would bring a revolution in the housing sector through increased financing by the banks.

In the West, he said, bank loaning facility was being extended for the construction of residential houses at affordable rates. The percentage of mortgage facility for housing in Pakistan stood at mere 0.2% as against 80% in the United States and the United Kingdom, 30% in Malaysia and 12% in India.

Khan said in line with the government’s vision of ease of doing business, all impediments in the way of the construction industry had been removed, and that was why the FGEFH was made an authority through legislation.

The prime minister said as the government employees, particularly the class four employees and police personnel, could not construct their own houses with salaries, the government could arrange bank financing for them.

He said attention was never paid to such issues in the past. Affordable housing would target those people and would also benefit 40 industries allied with the construction sector, creating job opportunities and pushing economic growth.

Describing 2020 as the year of economic growth and jobs creation, the prime minister said cities were being expanded which gave rise to serious issues like pollution, lack of basic facilities and food security. The government had decided to implement master plans for the urban areas, he added.

He said as Karachi had been turned into a jungle of concrete, Islamabad expanded up to Murree and green areas vanished from Lahore, the solution of those issues was the promotion and encouragement of vertical construction instead of horizontal buildings, for which laws had been relaxed.

Imran Khan said income from the multi-billion rupees commercial projects like the one launched in Islamabad for the construction of new Blue Area and others to be initiated in Lahore and Karachi soon, would be spent on the construction of housing facilities for the people in slum areas.

He also mentioned and appreciated the housing projects initiated by “Akhuwat Foundation”, a non-governmental organization (NGO) for low income groups.

The prime minister recalled that before coming to power, he was shocked by reading the news about a government employee, who committed suicide so that his house was allotted to his son after his death, according to the government rules.

He said the provision of basic facilities, including the housing facility, to the people particularly the poor ones was responsibility of the state.

The prime minister said as he had himself seen people sleeping at pavements in Lahore, he used to think that if he ever got power he would do something for such people, adding, that after coming to power he started the establishment of shelters for homeless people.

So far, the number of such shelters had reached 160 where the poor people were served free food with the cooperation of philanthropists, he added.

The prime minister also mentioned his government’s another initiative of health-card scheme for the poor and said in his opinion it was the health-card scheme due to which the people of Khyber Pakhtunkhwa gave the Pakistan Tehreek-e-Insaf another term and that too with a thumping majority.

He said five million people in Punjab had so far been provided with the health-card scheme facility and another one million would get the same soon under which any family could get free of cost treatment up to Rs 720,000 from public and private hospitals.

The prime minister said it was also decided to provide health cards to the special and handicapped as well as the transgender so that they could also benefit from the health cover being provided by the government.

He said the government in the next step would strengthen the country’s health system by offering duty concessions to private hospitals on the import of medical equipment and machinery.

Imran Khan also stressed the need of correcting education system through uniformity in syllabus and curriculum. “We have a three-tier education system of English, Urdu and religious mediums,” he said and remarked that different cultures created by such education system were also depicted through the recent Women March.

The prime minister said strengthening of education, health, housing and justice systems were the priority areas of his government.

He mentioned that the government would come up with a Legal Aid Bill under which the state would provide the facility of legal aid to the poor, who could hire a lawyer.

Earlier, the prime minister performed the ground-breaking of housing projects by unveiling the plaque.