Any further breach of law by TLP to not be tolerated, warns NSC 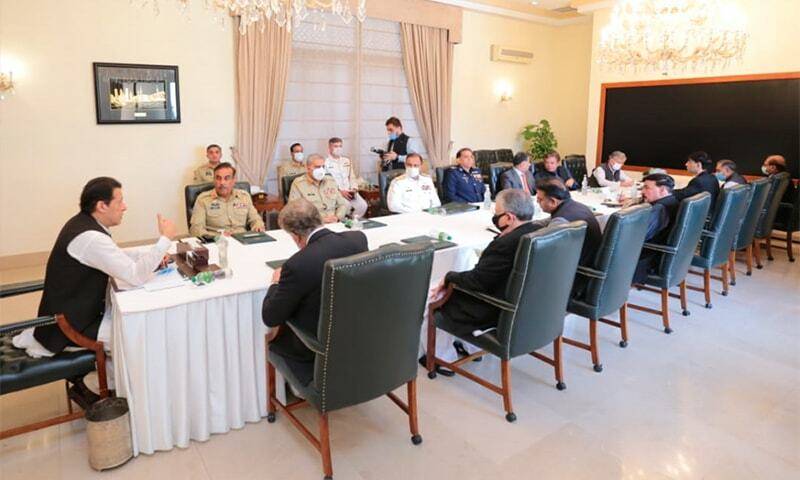 ISLAMABAD – Taking serious note of the unprovoked violent attacks committed by TLP members, the National Security Committee (NSC) resolved not to tolerate any further breach of law by the proscribed group.

The civil and military leaders expressed the resolve in a meeting convened under the chairmanship of Prime Minister Imran Khan on Friday. The meeting was attended by relevant Federal Cabinet members, National Security Adviser, Chairman Joint Chiefs of Staff Committee, all three Services Chiefs, DGs of ISI, IB and FIA, and senior civil and military officers.

The NSC received a detailed briefing on the country’s internal security situation and the ongoing agitation by the Tehreek-e-Labaik Pakistan (TLP).

The premier stressed that no group or entity will be allowed to cause public disruption or use violence to pressure the government.

The committee praised the police for their professionalism and restraint despite being directly targeted and suffering casualties, including four martyrs and over four hundred injured, but warned that the state’s restraint should not be seen as a sign of weakness.

While emphasizing that the government recognized the right of peaceful protest of all Pakistanis, Committee members were unanimous that TLP was deliberately employing violence against public property, state officials, and ordinary citizens to create instability in the country and that this shall not be tolerated. All organs of the state stood ready to act as per the law to protect the life and property of citizens.

The forum expressed condolences at the loss of life of policemen and committed to compensating and looking after their families. Commending the exceptional performance of the law enforcement agencies, the prime minister assured that the government will firmly stand behind them as they act to enforce the law and protect the public.

The forum took notice that no previous government or Prime Minister had taken such an unequivocal, public international stance on the issue of Namoos-e-Risalat and Islamophobia. Under the current government, Pakistan has successfully brought these issues to the fore of international diplomatic discourse in the United Nations, Organization of Islamic Cooperation, and European Union, among other fora. One key objective of establishing the Rehmatul-lil-Alameen Authority is also to intellectually counter international propaganda against Islam and sanctity of the Prophet (PBUH).

Participants decried TLP’s misuse of religion and the issue of Namoos-e-Risalat for political gains, which was misleading the common man and creating internal discord within society. TLP’s violence had ended up furthering the agenda of sectarian elements and external enemies of the state. It was pointed out that despite the overwhelming majority of the over 1.5 billion Muslims globally holding utmost love and respect for our Prophet (PBUH), no such violent agitation had taken place in any other Muslim country.

The civil-military leaders recalled that TLP had adopted the ploy of violent street agitation on numerous occasions since 2017 and made unrealistic demands each time, solely as a tool to gain political strength. In the process, TLP’s actions have caused public disorder, serious economic losses to the country, besides boosting the morale of other terrorist outfits seeking to challenge the state’s writ.

The committee unanimously resolved to guard its sovereignty from all internal and external threats and to not allow TLP to challenge the writ of the state in any way. Participants endorsed the government’s decision to negotiate with the group only within the bounds of law, without offering leniency for any crimes committed by TLP operatives. Endorsing the view of the Committee, the Prime Minister instructed that all measures and actions necessary to enforce the law and protect the interests of the state and public shall be ensured.

Interior Minister Sheikh Rashid Ahmed, speaking from a presser after the crucial meeting, said the negotiations were underway between the government and banned organisation on ending the march to Islamabad.

Briefing the media in Islamabad after the NSC meeting convened by Prime Minister Imran Khan, Rasheed mentioned that Prime Minister will address the nation tomorrow (Saturday) about the security situation, saying the premier will present the situation before the nation.

Rashid said the security of Punjab has been handed over to the Rangers and Prime Minister Imran Khan has given clear instructions that the government won’t tolerate those who challenge the writ of the state and disrupt the peace in Pakistan.

Amid the top NSC meeting, the authorities have placed shipping containers over Chenab and Jhelum bridges to counter the charged protesters from advancing to Islamabad. Around four law enforcement personnel had been martyred in clashes with TLP workers, while scores suffered injuries.

In twin cities, the authorities have blocked the entry and exit points to the city due to a feared disturbance in the law and order situation in the wake of the march.

Rangers and police contingents are also deployed at the Chenab toll plaza to counter the violent protesters. The security personnel also have armoured vehicles with them and are equipped with riot gear, per reports. Punjab Rangers have also marked a 'red line', and put up a notice nearby warning the protesters not to breach the line.

Earlier today, Minister for Information Fawad Chaudhry said at least 36 activists of the militant outfit, who were involved in using fake social media accounts to propagate hate, have been detained. He also added that more arrests will be made shortly.

Police in the provincial capital registered two cases against the workers of the banned organization under the charges of disrupting law and order while different teams were carrying out raids to arrest others.

Shortly before the two meetings began on Friday, Federal Information Minister Fawad Chaudry announced that a crackdown against the TLP social media activists had been launched.

On Thursday, Federal Minister for Information Fawad Chaudhry took to Twitter where he shared a tweet in light of today’s meet up.

“In view of the situation arising because of the illegal activities of the proscribed organisation, Prime Minister Imran Khan has convened a meeting of the National Security Committee tomorrow. Other issues related to national security will also be considered in this meeting”, the tweet reads.

The violent protests by proscribed group members entered the eighth day today while law enforcement personnel have cordoned off major highways to counter the charged activists.

Meanwhile, strict security measures have been made in twin cities. Metro service has been suspended while the metropolis suffered major traffic jams.