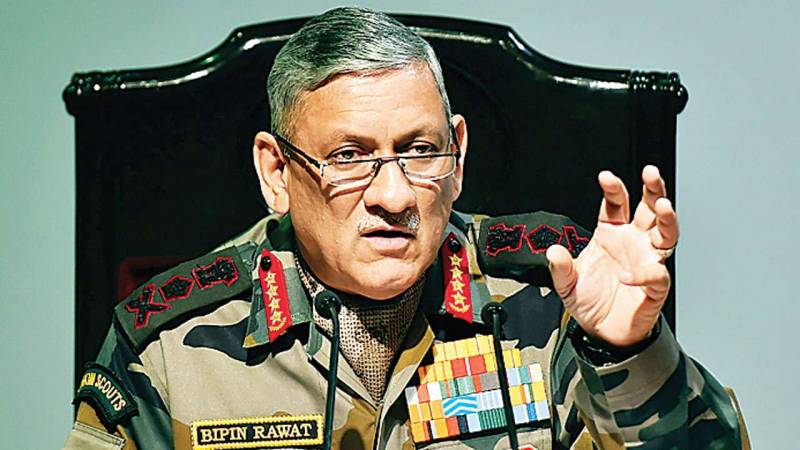 Delivering a lecture at the National Defence Academy (NDA) Passing out Parade ceremony in Pune, India’s army chief General Bipin Rawat said Pakistan “should turn into a secular state if it wants good ties with India”.

His crazy comments come two days after Pakistan's Prime Minister Imran Khan tried to woo the neighbouring country to resume bilateral talks for peace and the solution of Kashmir conflict.

“I, the prime minister, our political leadership, army, and the institutions are all on one page. We want to move forward,” Khan told a large gathering after opening the Kartarpur crossing, which has been dubbed as the ‘corridor of peace’.

Urging India to give peace another chance, Khan said: “If India takes one step forward then we will take two steps forward toward friendship.”

Responding to Imran Khan's statement, Gen. Rawat said: “There is a contradiction in what they are saying. One step from there should come in a positive manner, we will see if the step has an effect on the ground. Till then our nation has a clear policy- terror and talks can't go together.”

He went on to claim that “while New Delhi had taken the first step on multiple occasions, it is now up to Islamabad to ‘take action against terror’.”

On Nov 28, India refused to attend the South Asian Association for Regional Cooperation (Saarc) conference if it is held in Pakistan - for the second time.

India’s Minister for External Minister Sushma Swaraj brushed off any possibility of development in bilateral ties, despite the opening of the Kartarpur border. “Until and unless Pakistan stops terrorist activities in India, there will be no dialogue and we will not participate in Saarc,” said the minister, once again ratcheting up her country’s anti-Pakistan rhetoric.

Meanwhile on Friday, India’s Border Security Force said it has indigenously developed bullet-proof bunkers to protect its troops against fatal sniper fire while a sensor-based ‘smart fence’ is expected to come up soon to check ‘infiltration’ on the eastern frontier.