ISLAMABAD - Former interior minister Chaudhry Nisar Ali Khan branded his recent tenure as the 'brightest and the most challenging period of his entire political career'.

In a letter to his secretary -that seems to be a farewell letter- Nisar lauded his staff for their diligence, commitment and hard work. He also thanked the former secretaries, who in their tenures with him tried to bring about a qualitative change in the working environment of the ministry.

"The present tenure was the most challenging period during my entire political career in terms of huge and multifaceted challenges that we, as a country were faced with," his letter said. 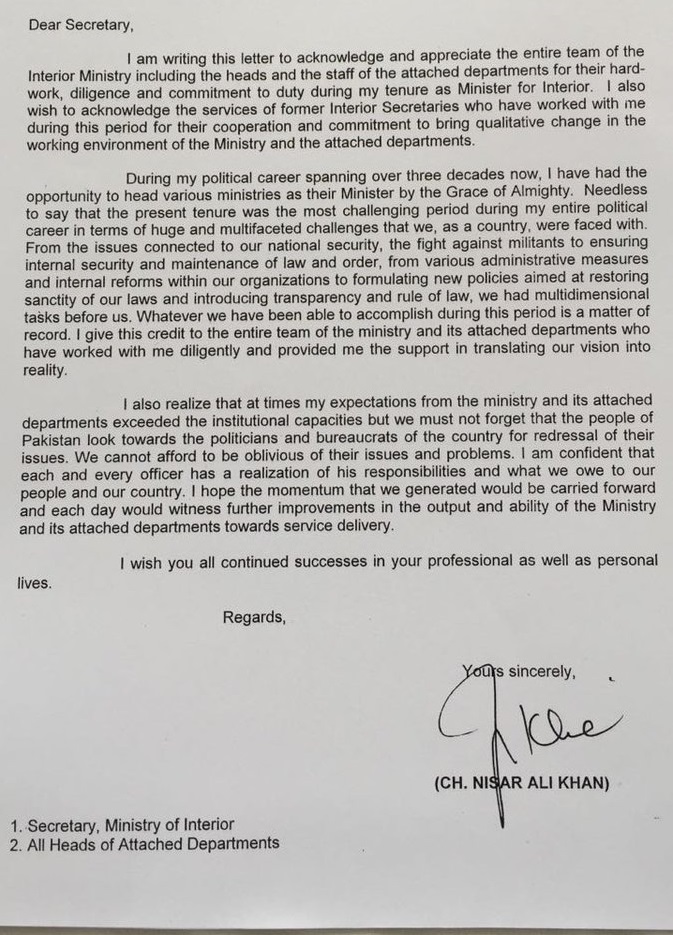 “From the issues connected to our national security, the fight against militants to ensuring internal security and maintenance of law and order, from various administrative measures and internal reforms within our organisation to formulating new policies aimed at restoring sanctity of our laws and introducing transparency and rule of law, we had multi-dimensional tasks before us,” he wrote.

He acknowledged that whatever was achieved during the time period was due to the entire team of the ministry and attached departments.

He also admitted that occasionally he expected more from the ministry and its attached departments than the institutional capacities but reminded that the people looked towards the politicians and bureaucrats for redressal of their issues.

"We cannot afford to be oblivious of their (masses) issues and problems," it read.

He expressed hope that the momentum generated during his tenure would be carried forward and each day would witness further improvement in the ability of the ministry and its attached departments towards service delivery.

It bears mentioning that Ch. Nisar, a close confidante of former premier Nawaz Sharif announced that he would be resigning from the post a day before the Panama verdict. However, minutes later, his ministry issued a clarification that the minister would not step down following the Panama verdict.

The former interior minister is considered close to military corridors and chief minister Punjab Shehbaz Sharif and according to political observers, Nisar would assume the charge again as soon as Shehebaz Sharif gets himself elected to the PM office after securing victory in NA-120 elections.

Another interesting fact about Ch Nisar is that he was the classmate of Pakistan Tehreek-e-Insaf chairman Imran Khan, who 'accidentally' met him last night at an eatery in the capital.