ISLAMABAD - The federal government has imposed a ban on Pak-Turk International Cag Education Foundation (PTICEF), declaring it a proscribed organization.

According to a notification issued by the interior ministry, the entity was listed among outlawed organizations under Section 11-B of the Anti-Terrorism Act – 1997 on solid pieces of evidence of its connections with terrorists.

It also stated that PTICEF was also placed in ‘First Schedule’, whereas, the foundation was declared a banned organization on April 18. 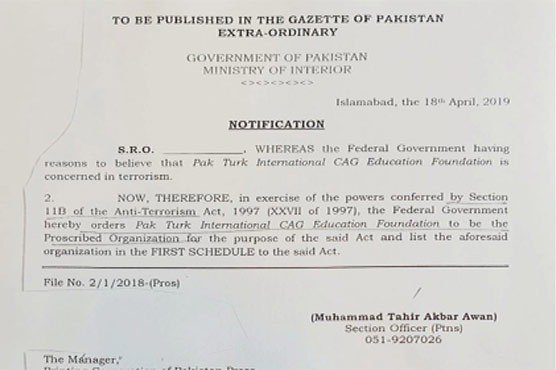 The development comes weeks after the Supreme Court rejected a review appeal filed by Pak-Turk International Cag Education Foundation (PTICEF) against the court decision to declare it a banned organisation;  Justice Azmat Saeed heading a three-member bench comprising Justice Maqbool Baqar and Justice Ijazul Ahsan had remarked that the plea was inadmissible.

The review petition was filed against handing over of Pak-Turk schools to the Turkiye Maarif Foundation.

During the course of proceedings, the counsel for the Pak-Turk schools administration argued that the Turkish government had no role in the establishment of the schools, it was the Turkish people who had donated funds for the creation of the schools.

Pakistan and Turkey engaged on diplomatic level after the botched coup in 2016; Ankara asked Pakistani to take action against Pak-Turk schools believed to be run by the supporters of Fethullah Gulen, who was alleged of trying to overthrow the regime through a coup.