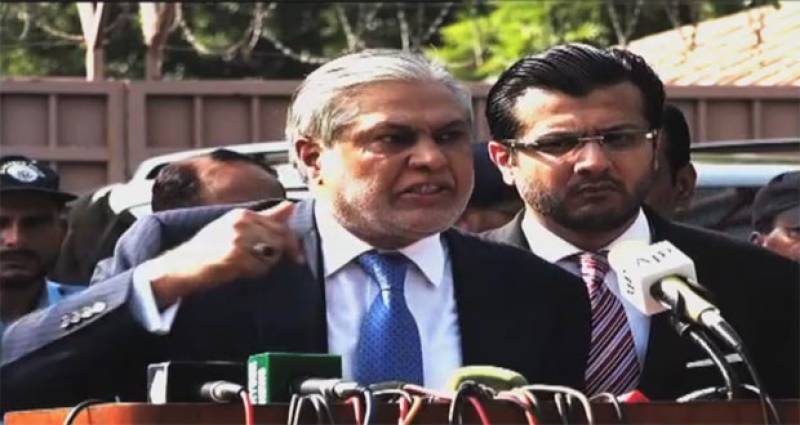 ISLAMABAD - The accountability court in Islamabad has summoned the sons of Finance Minister Ishaq Dar on Thursday pertaining to a reference regarding assets beyond means.

The summons in his regard were issued to Dar’s sons, Ali Mustafa and Mujtaba Husnain residing in Dubai. After receiving the summons, both his sons flew off to London to accompany Ishaq Dar.

Reportedly, Ishaq Dar is likely to return to the country to appear before the accountability court on Thursday, however, it's still under wraps whether his sons would also show up in court or not.

Ali Dar is the son-in-law of former Premier Nawaz Sharif, whose other son-in-law Captain (r) Safdar is already indicted in graft reference regarding upscale London flats.

Earlier, the accountability court Judge Muhamamd Bashir on October 30 had issued bailable arrest warrants for Finance Minister Ishaq Dar after he failed to appear in graft proceedings against him.

Dar’s legal counsel had informed the trial court that after attending the 16th Central Asia Regional Economic Cooperation Ministerial Conference in Dushanbe, Dar had traveled to Jeddah, where he fell sick and had to go to London for medical treatment.

The counsel had also presented Dar’s medical report and assured the court that his client would appear at the next hearing on Thursday.

Dar had been indicted by the accountability court on September 27 in a reference pertaining to the ownership of assets beyond known sources of income filed by the National Accountability Court in line with the directives of the Supreme Court in the Panama Papers case.