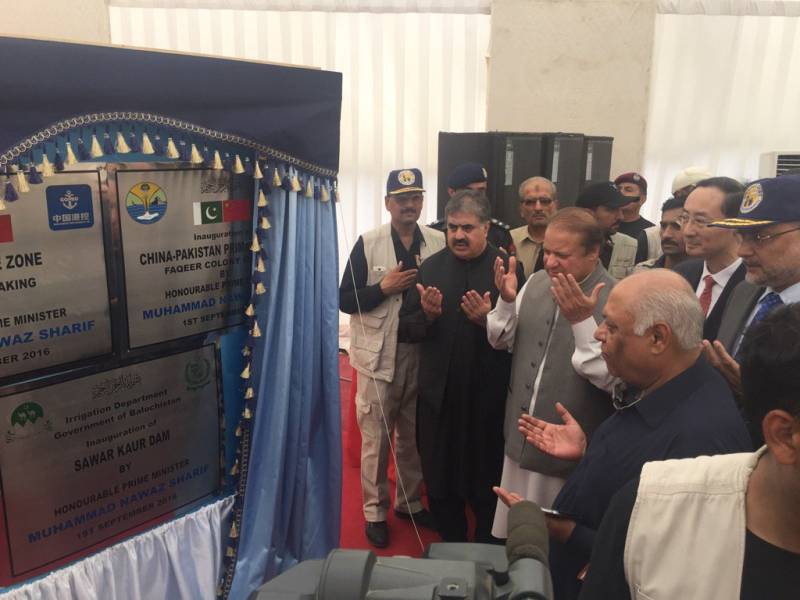 Addressing on the occasion, development projects worth billions of rupees are being implemented in Balochistan to guarantee the progress and prosperity of the province. These projects will be completed in the next two to three years, he said.

The Prime Minister said he is very happy to see that Gwadar is transforming into an international city.  He said Gwadar has the potential to become a world class seaport.  He said it is a place which is not only important for Pakistan, but also for the region and the world.

He said Gwadar which used to be most backward city of Pakistan is becoming the most prosperous city of the region.  He said that Gwadar seaport is the nerve centre of China-Pakistan Economic Corridor.

The Prime Minister pointed out that 300MW coal fired power plant is being built which will provide electricity to Gwadar and other parts of Balochistan. Likewise, he said desalination plant will provide clean drinking water to water to Gwadar and adjoining areas.

Nawaz Sharif said domestic and international flights will be operated from Gwadar international airport linking Gwadar to the world.

He said he is proud of Pakistan, China friendship and said it will be strengthened further.  He said Pakistan and China is implementing joint venture in infrastructure, power, railways and other sectors including industrial zones and economic zones.  He said through infrastructure projects, traffic from Gwadar will go to China and from China to Gwadar.

The Prime Minister said over ten thousand MW of electricity will be added to the national grid by the end of 2017 or at the beginning of 2018.  He hoped that load shedding will end in 2018 in the country.  He said work is continuing on different projects in full swing.

He directed the Gwadar Port Authority not to allow land encroachers to crop up in the area.  He also directed the authority to follow the Master Plan of Gwadar City at all costs.

The Prime Minister as a result of operation against terrorists, terrorism is breathing its last.  He said peace has also been established in Balochistan.  He paid tribute to the armed forces, security agencies, police, administration and other institutions who sacrificed for peace in the country.

At the conclusion of the ceremony, MOUs on different projects were signed between Pakistan and Chinese authorities.