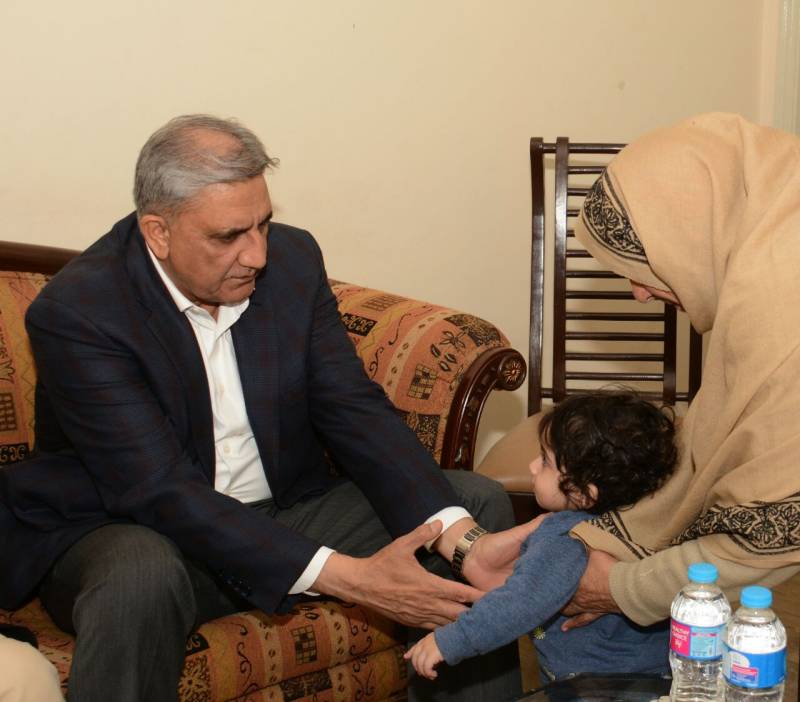 KHUSHAB - Chief of Army Staff (COAS) General Qamar Javed Bajwa on Saturday visited the family of Major Ishaq, who was martyred in an exchange of fire during a search operation at a terrorist hideout in Kulachi, Dera Ismail Khan on Nov 22.

According to Inter Services Public Relations (ISPR), the Army Chief met the family of Major Ishaq in Lahore and paid tribute to Shaheed and his family for their great sacrifice for the motherland.

Maj Ishaq has made us all proud," ISPR quoted the army chief.

He further said that terrorists through cowardly acts cannot weaken the resolve of the nation, adding that the terrorists will be defeated at any cost.

The 28-year-old martyr, Major Ishaq, had lost his life during a search operation at a terrorist hideout in Kulachi, Dera Ismail Khan.

The martyred officer has left behind a widow and an infant. Ishaq is the fourth officer to be killed in the line of duty in the past three months.

On November 13, Captain Junaid Hafeez and Sepoy Raham were martyred in a cross-border attack by terrorists from Afghanistan in Bajaur Agency.

Four other troops were injured in the assault on the border post.