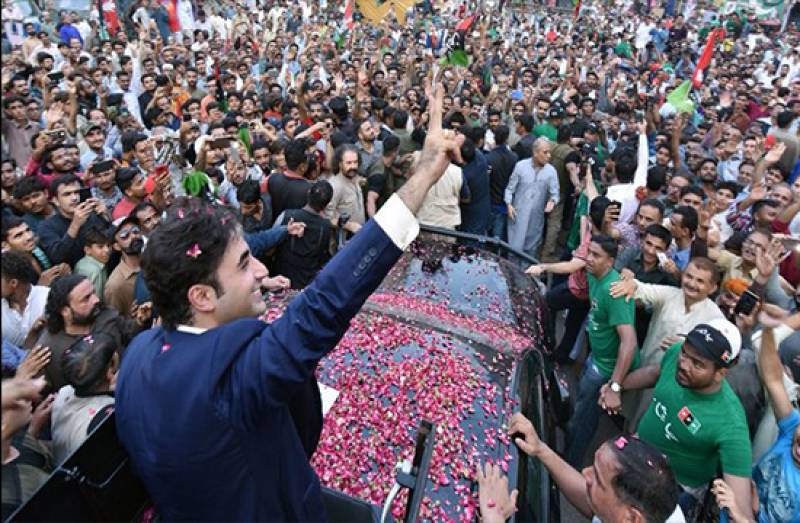 KARACHI: The Pakistan Peoples Party information secretary, Maula Bux Chandio deemed security arrangements for Bilawal Bhutto-Zardari, inadequate after his convoy was pelted with stones in his visit to Lyari yesterday.

Maula Bux Chandio reprimanded the caretaker government for its failure to make sufficient security arrangements during the election campaign in an area as sensitive as Lyari.  He further added that the mob that pelted the convoy with stones comprised of anti-PPP and anti-democracy elements.

Moreover, Bilawal’s spokesperson, Senator Mustafa Nawaz Khokhar, also commented on the episode and condemned the law enforcement agencies (LEAs) for standing idle while the mob encircled the PPP leader’s convoy. He also made a reference to the role of media in favouring only one “Ladla” party (alluding to PTI) and carrying out very selective and contorted coverage of other parties.

Hundreds of angry residents of Lyari’s Bihar Colony staged a protest as PPP Chairman Bilawal Bhutto Zardari led a rally of his supporters in the area to kick start his election campaign. The convoy came under attack as scores of protestors pelted stones at his convoy on Sunday.

According to reports, the raged protesters were able to smash the windows of the vehicles accompanying the 28-year-old politician. At least two PPP workers have been injured in the attack.

Bilawal’s convoy remained stuck in the area for half an hour as police and PPP worker were unable to diffuse the situation.

Bilawal remained undeterred in his efforts and is reported to have said “This is my first election and I’m contesting it from Lyari. People of Lyari always supported my mother Shaheed Mohtarma Benazir Bhutto and I know they will also support me. I will complete the mission of SMBB.”