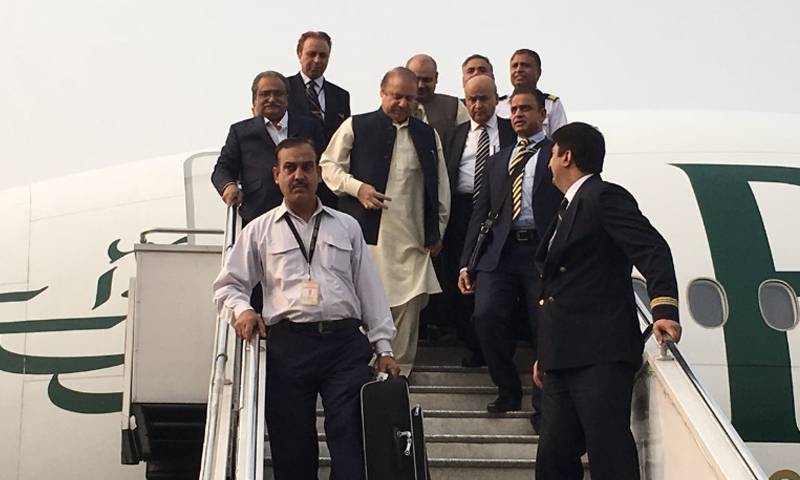 Security has been bolstered due to the arrival of the former premier at the airport, while citizens have been barred from entering the Rawal Lounge.

Sharif headed to Punjab House from the airport in a motorcade, comprising 56 vehicles of security forces and PML-N leaders.

Earlier, media reports suggest a ten-member team of the National Accountability Bureau (NAB) will “welcome” the former premier as he appeared from the plane on the runway.

The NAB team, comprising Lahore and Rawalpindi officials, had been given access to the plane carrying Sharif following a letter from the anti-graft watchdog.

The access had been gotten to implement the accountability court orders regarding bailable arrest warrants which were issued on Oct 26 after he failed to show up in the court.

Later, the team was barred from receiving the former prime minister at the airport and directed to serve the summons at Punjab House in Islamabad.

Talking to Geo News before leaving for Pakistan, Sharif said while referring to the deteriorated health of his wife said “My personal family issues on one side, I am going to Pakistan to appear before the NAB court on 3rd November”.

“We have faced sham trials before but never ran away and face accountability time and time again, we faced with valor the Whatsapp JIT, we have faced with courage the Supreme Court bench that called us Sicilian Mafia and Godfather,” said Nawaz Sharif.

The ex-PM alleged that he and his family were facing fabricated cases, adding that Panama Papers case verdict brought embarrassment to the nation.

On October 30, Sharif announced his decision to return to Pakistan and face the cases against him. His statement follows a high-level huddle of PML-N in London.

The court has indicted Nawaz in three references regarding Avenfiedl apartments, Al-Azizia Steel Mills and other companies. The cases had been filed by the NAB in the light of Supreme Court orders in the Panamagate case.