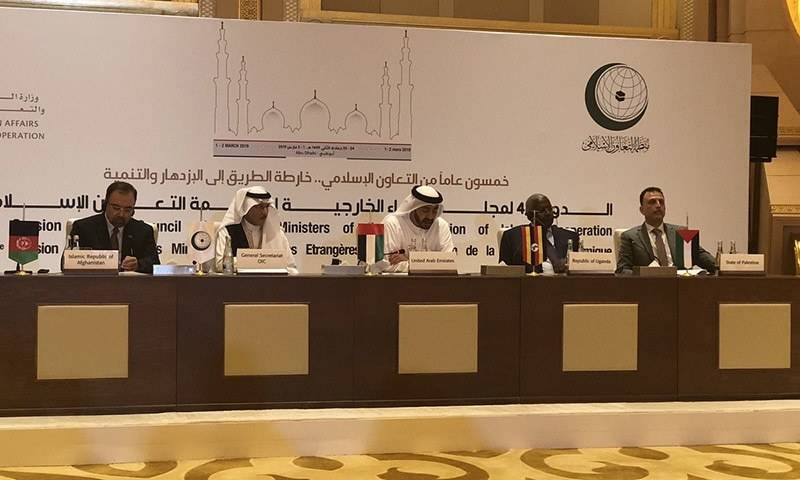 ABU DHABI - The 46th Session of the Council of Foreign Ministers of Organization of Islamic Cooperation (OIC) held in Abu Dhabi, reaffirmed its unwavering support for the Kashmiri people in their just cause, the Radio Pakistan reported.

In a resolution adopted by the session, the OIC member states reiterated that Jammu and Kashmir remains the core dispute between Pakistan and India and its resolution is indispensable for the dream for peace in South Asia.

"The OIC resolution also condemned in the strongest terms recent wave of Indian terrorism in Occupied Jammu and Kashmir and expressed deep concern over the atrocities and human rights violations in IoK," said a press release from the Foreign Office.

The OIC members expressed concern over Indian violation of Pakistani airspace, supporting Pakistan's right to defend itself against unprovoked acts of aggression.

In a new resolution sponsored by Pakistan, OIC member states urged India to refrain from the threat or use of force.

Highlights of the day 1 of the #OICCFM46 holding in #AbuDhabi, #UAE. #OIC pic.twitter.com/ZiHn4YlVV6

In his reaction to the OIC declaration, Foreign Minister Shah Mehmood Qureshi said that the OIC resolution has endorsed Pakistan’s stance on Occupied Kashmir calling it central to regional peace and has condemned Indian terrorism in Kashmir.

The OIC resolution has endorsed Pakistan’s stance on Kashmir calling it central to regional peace and has condemned Indian terrorism in Kashmir. The OIC, recognising Pakistan's right to self defence, denounced Indian aggression. I congratulate the nation on this success.

Meanwhile, Pakistan boycotted the plenary session of the 46th Council of Foreign Ministers at the Foreign Minister level in protest against an invitation extended to Indian Minister of Foreign Affairs Sushma Swaraj as a guest of honour at the inaugural session.