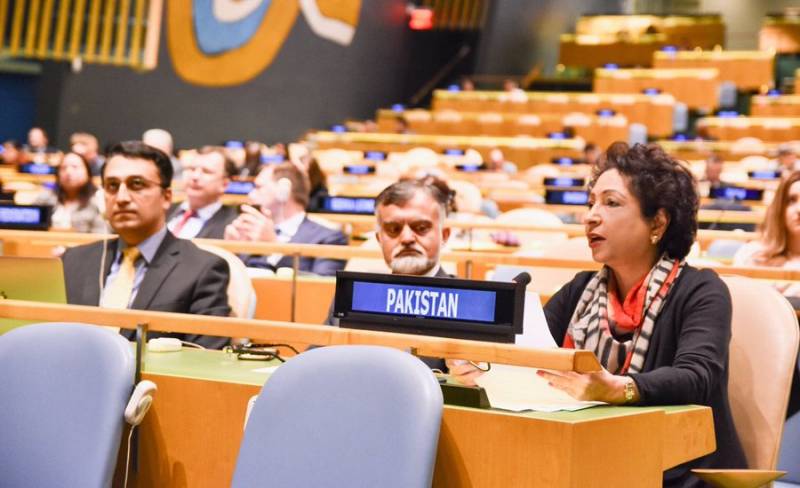 NEW YORK – At the United Nations, Pakistan has called for increased global efforts to counter the growing intolerance against Muslims terming it a grave threat to global peace and security.

Speaking in the General Assembly, Pakistan’s Ambassador to the UN Maleeha Lodhi said that the growing prejudice against Islam was becoming increasingly commonplace as a result of extreme nationalist and populist ideologies in the West as well as in our region.

The Pakistani envoy was speaking after the adoption of a resolution titled “Combating terrorism and other acts of violence based on religion or belief”.

The resolution was tabled in the General Assembly by Turkey’s Foreign Minister, Mevlüt Çavuşoğlu in response to the recent Islamophobic terrorist attack on two mosques in Christchurch, New Zealand. It was cosponsored by Pakistan and adopted by consensus with the support of 40 other cosponsors.

Pakistan was among the core group of 9 countries that led the process which concluded successfully with the passage of the resolution.

Welcoming the adoption of the resolution as timely and apt, Ambassador Lodhi said that by this resolution the 193-member world body had sent a strong message of its shared commitment to stand united against racial and religious hatred.

Ambassador Lodhi said that the Christchurch attack could not be seen in isolation. It was only the latest manifestation of a growing phenomenon that is rooted in hate, bigotry, racism, and the extremist ideology of racial and white supremacy.

She ascribed this phenomenon principally to the rise of extreme nationalist and populist ideologies in liberal Western democracies, and in Pakistan’s own neighbourhood.

This, Ambassador Lodhi said, was evident in policies aimed at creating walls and barriers against displaced populations, as much as in attempts to denigrate Islamic beliefs and its sacred personalities on the pretext of freedom of expression.

“The political falsehood of equating people of different religions with violent extremism, in order to garner political support for the forces of hate lies at the heart of this phenomenon”, she stressed.

Pointing to the role played by the social media in this regard she said that it was time to evolve ways to ensure that social media companies were held accountable for their content that incites violence or spreads hatred. This was necessary as the social media is increasingly regarded as one of the most radicalizing instruments of our era.

Urging the need to strengthen efforts to foster a global dialogue on the promotion of a culture of tolerance and peace, Ambassador Lodhi said that pervasive Islamophobia was a global phenomenon that necessitated a global response.

“A collaborative, coherent and committed action was needed against incidents that fuel, funnel and fortify this narrative against Islam and Muslims”, she added.

This global action, she underscored, must be based on respect for human rights and diversity, and encourage space for diverse voices, religions, worldviews and faith traditions.

Pakistan, Ambassador Lodhi said, remained committed to continue efforts to build bridges of understanding and challenge and resist those who seek to construct walls of bigotry and hatred.

The Pakistani envoy also joined others in paying tribute to the martyrs of Christchurch and expressed solidarity with the people and the government of New Zealand. She also paid homage to the nine martyrs from Pakistan and highlighted the heroism of Naeem Rasheed, who tried to stop the terrorist in order to protect the others.