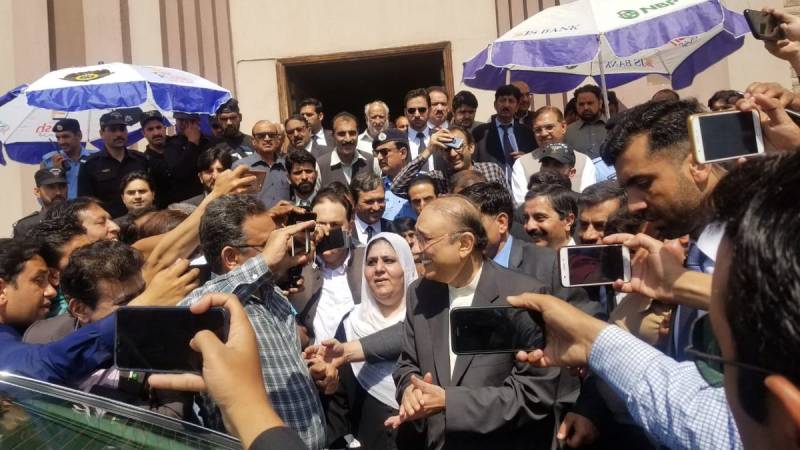 ISLAMABAD – An accountability court in Islamabad on Monday rejected the exemption plea of Pakistan People’s Party (PPP) co-chairman Asif Ali Zardari and his sister Faryal Talpur and ordered all 16 suspects nominated in in a mega money laundering case to appear on April 16.

As the former president and his sister appeared before the accountability court for the first time, two women suspects filed a plea in the court offering to give their testimony in the case. The women told the accountability judge Arshad Malik that they had made a similar request to the National Accountability Bureau (NAB) chairman as well When the judge asked the NAB prosecutor what he thought about the request, the prosecutor said the bureau would first need to check whether the request had been lodged. The court then directed the women to submit their written pleas before the judge.

Around 2,000 police personnel and as many as 200 Punjab Rangers were stationed at the court for security. Earlier on March 20, the PPP workers and police clashed outside the National Accountability (NAB) court where Zardari and PPP co-Chairman Bilawal Bhutto Zardari have recorded their statements.

Both were questioned by the NAB teams under the supervision of Irfan Mangi, DG NAB Rawalpindi, for almost two hours in three different cases.

KARACHI - The Sindh High Court on Tuesday turned down all the petitions seeking the reversal of a banking court's ...

In December 2015, the Federal Investigation Agency began a discreet investigation into certain bank accounts through which multi-billion rupees transactions have been made. According to FIA sources, information regarding the fake accounts came to the fore when an intelligence agency picked up a prominent money changer in an unrelated case.

They were accused of alleged money laundering to the tune of over Rs4 billion through 29 ‘fake’ bank accounts in three banks.

On March 15 of this year, a banking court had approved the National Accountability Bureau’s request to transfer the case to the accountability court of Rawalpindi for trial.

The orders had been issued after the Supreme Court referred the matter to accountability watchdog to launch its probe independently and wind it up within two months.

As the monitoring and investigation of these suspicious accounts continued, it surfaced that five of these accounts in two banks – the Sindh Bank and Summit Bank – had been used for transactions worth around Rs15 billion.

In July, Zardari’s close aides; Hussain Lawai, Taha Raza and two others were arrested. Subsequently, the first case was registered in the mega-corruption scandal.

The FIA submitted its report to the apex court on July 8 which revealed a web of companies and accounts that were being used to transfer billions of rupees. In all, 29 accounts were identified that received payments, totaling at least Rs35 billion.

In August, Omni Group chief Anwar Majeed was arrested along with son Abdul Ghani Majeed when they returned to the country on being summoned by the apex court. They are now on judicial remand.