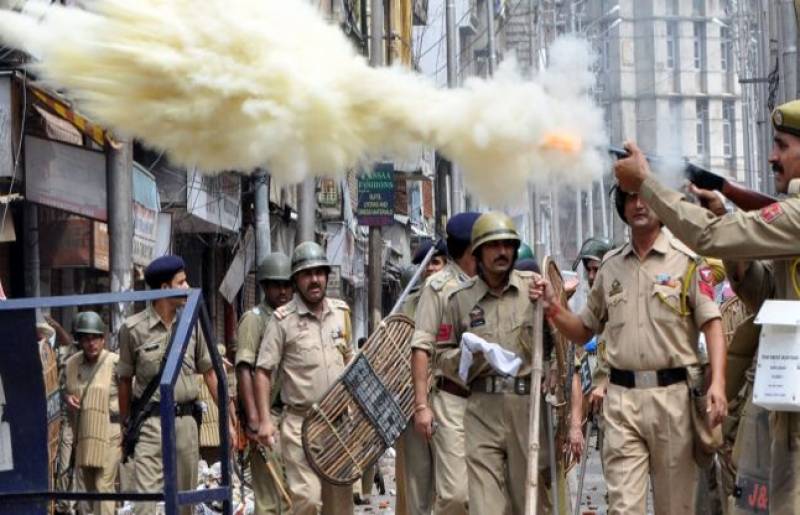 SRINAGAR - As the situation in occupied Kashmir keeps mounting continuously, the valley is witnessing the biggest crackdown in 20 years with 446 arrests across Occupied area in just one week.

Despite the brutal force being used to quell the protests in the Valley even after 90 days of lock down, the longest in Kashmir’s history, it has launched the biggest crackdown in more than two decades, conducting nocturnal raids across Kashmir, Indian media reported.

However, according to Kashmir Media Service, the numbers of arrests and killings are more than what is being told by the occupying forces.

Since the killing Burhan Wani on July 8, police in occupied Kashmir have arrested close to 7000 people in the valley while more than 450 people have been booked under the draconian Public Safety Act (PSA), the highest number-ever in the Valley.

According to Indian Express, in addition to these figures, 1500 others are under detention in different police stations across Kashmir without any charges and their detention doesn’t reflect in the official records.

The lowest number of arrests have been made in Kupwara district, the most volatile district in north Kashmir during the past three months. The official records show that more than 250 civilians were arrested and close to 100 detained in the district.

The National Conference has also accused Mehbooba Mufti-led government of breaking all the records of “oppression”. “Seven thousands youth have been arrested, PSA has been slapped on more than 500 and 2300 youth have been booked in fake cases. There is no space in the jails in Kashmir,” National Conference spokesman Junaid Azim said. “Mehbooba Mufti has broken the records of oppression that his father had made as Home Minister) of India”.

"In north Kashmir’s Baramulla district, which was relatively calm this time, police have booked 107 people under the Act, the highest number in any district. This is followed by Pulwama where PSA has been slapped on more than 100 civilians. The lowest number of PSAs have been slapped in Ganderbal district where 18 people have been booked under it," Indian Express writes.

Earlier today, a 12-year-old boy who sustained injures after Indian forces fired pellet guns at protesters,  died after succumbing to serious injuries, raising the death to 110 in the ongoing Kashmir Intifada.

The death has sparked widespread anger in the city and a curfew has been imposed to quell more protests.

A massive march was also conducted on Friday in occupied Kashmir towards the UN office at Sonawar in Srinagar, to submit a memorandum regarding India’s recent attempts of creating war hysteria on the Line of Control to deflect world attention from the deteriorating human rights situation in the territory.