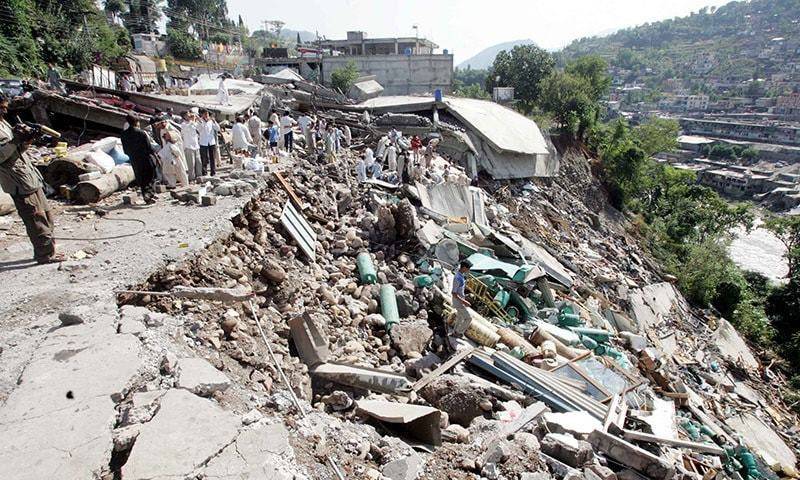 ISLAMABAD - The 14th anniversary to pay tributes to martyrs of catastrophic earthquake 2005 is being observed in Azad Kashmir today (Tuesday).

One minute silence was observed at all District Headquarters at 8:54 am.

Main Prayer Ceremony will be held at University Ground Muzaffarabad.

In his messages, President Dr Arif Alvi has said that the observance of National Resilience Day is an occasion to evaluate and reiterate commitment at making greater preparedness to face natural calamities and by showing resolve for disaster risk reduction.

The President said Pakistan observed the Day to express solidarity and sympathy with families affected by natural calamities. He also urged all the federal and provincial stakeholders to create synergies to ensure disaster risk reduction, preparedness, mitigation, and rehabilitation.

The President also paid tribute to the people of Pakistan who had exhibited courage, selflessness, the spirit of sacrifice and resilience in the face of catastrophes.

On the occasion, Prime Minister Imran Khan has reiterated that the Government would continue to adopt all possible measures for a disaster-resilient Pakistan through more effective prevention, mitigation and preparedness.

The prime minister said, he would like to express his deepest condolences to the families of victims who lost their loved ones in the unfortunate earthquake, the Radio Pakistan reported.

The prime minister also paid homage to the victims of the recent earthquake in Mirpur, Azad Jammu and expressed the resolve that they would continue to provide all possible support to the people in the affected areas till their complete rehabilitation.