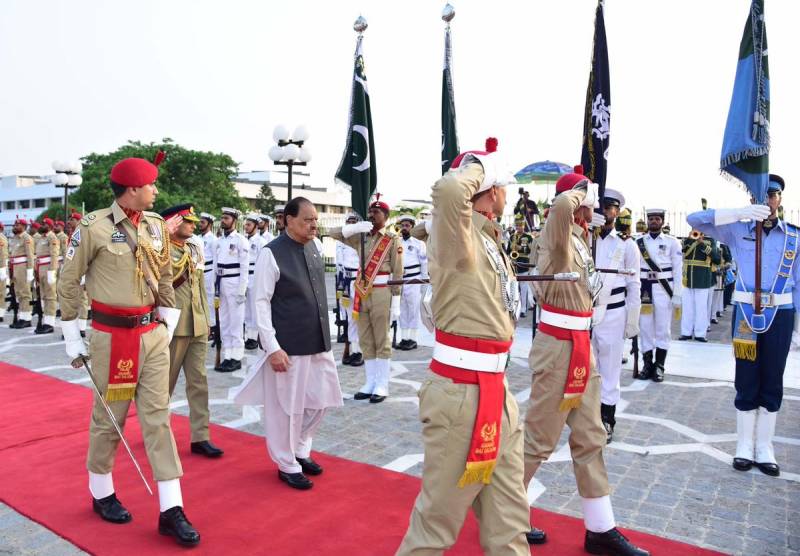 ISLAMABAD - President Mamnoon Hussain was given Saturday a farewell guard of honor at Aiwan-e-Sadr on completion of his five-year constitutional term.

At a special ceremony held at the President House, Mamnoon was given guard of honour by a smartly turned out contingent of the armed forces, Radio Pakistan reported. The outgoing president inspected the guard of honour.

Clad in brown shalwar kameez and charcoal waistcoat, the president arrived at the forecourt of the Aiwan-e-Sadr on a buggy being pulled by the horses.

The president was escorted to the salute dais who, after the national anthem, reviewed the guard of honor presented by the smartly turned out contingents of the armed forces.

On Friday, speaking at the farewell meeting with officers and staff of the President House, he said the country’s development and prosperity lie in rule of law and supremacy of the Constitution. Mamnoon said he is leaving the presidency after completing his term with “full satisfaction”.

“I left no stone unturned in fulfilling the responsibilities given to me by the people of Pakistan,” he added.

The president further added, “During my tenure, I strictly remained within the constitutional limits and powers.”

LAHORE - Dr Arif-ur-Rehman Alvi, Pakistan Tehreek-e-Insaf’s candidate, was elected Tuesday as the next President of ...

Mamnoon also thanked his staff for their cooperation in enabling him to fulfill his official duties in an amicable manner.

Moreover, he advised his staff to pay special attention towards the education and training of their children for Pakistan’s better future and development of the society.

The septuagenarian Mamnoon Hussain took oath as 12th head of state on September 9, 2013 after his election as a candidate of the Pakistan Muslim League-Nawaz. He joined the PML-N in 1993 and also served as the Sindh governor in 1999.

Newly elected president Arif Alvi will take the oath on Sunday. Chief Justice Saqib Nisar will administer the oath to him.

Arif Alvi won the presidential elections on Tuesday by security 352 votes in the electoral college of national and provincial assemblies and the Senate.–Agencies