‘Spoilers’ trying to create wedge between Pakistan, US: Ahsan Iqbal 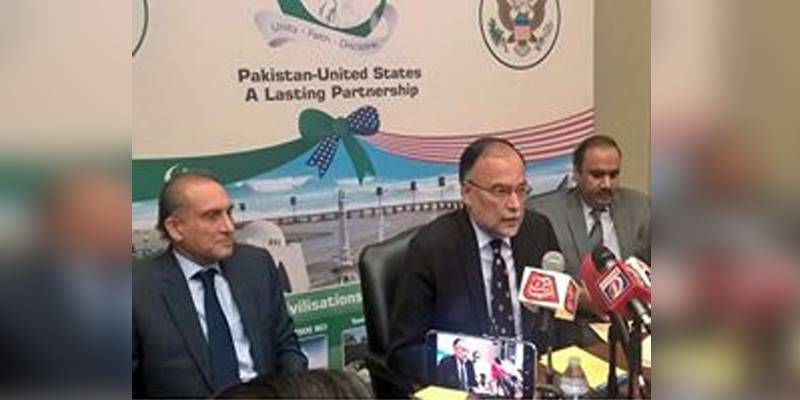 WASHINGTON – Interior Minister Ahsan Iqbal has called for a structured dialogue between Pakistan and the United States, which have a long history of the relationship.

The minister stated this while talking to Pakistani media at the embassy in Washington. He said that “spoilers” are trying to create a wedge between Pakistan and the United States, but added that they two countries have a long history of cooperation and should find common grounds for working together in the future.

The bilateral relations between Pakistan and the US deteriorated after President Donald Trump started the New Year by alleging Pakistan of being a liar and deceitful in a tweet.

Iqbal, who is in Washington at the invitation to attend the Annual National Prayer Breakfast hosted by the White House and attended by President Trump, said that the two countries must realize each other’s legitimate security concerns.

During his visit, the minister held meetings with lawmakers, media and Pakistani community leaders.

He apprised them of Pakistan’s position on the current stand-off with the US, and the country’s economic conditions.

The minister said that Islamabad desires strong ties with Washington on the basis of mutual respect, adding, “There should be an open and candid discussion”.

He added that any relationship has to be based on dignity and mutual respect for each other and nothing can be achieved through using pressure tactics.

Emphasising the need for working together, the minister said that both the US and Pakistan were major stakeholder in Afghanistan at the world and regional levels respectively.

Iqbal observed that Pakistan did not need American aid, but that the US has a very important place in Pakistan’s development agenda. The US has an important role in developing Pakistan’s human resources, he added

Replying to a question, the minister said that there has been a significant reduction in terrorism-related incidents compared with the situation in 2013 when the PML-N government took over.

“We have controlled terrorism with our own meager resources and have forced extremist groups to leave the country,” he added.

The minister also underlined the need for respecting Pakistan’s territorial integrity and said if the US has any information, it should be shared with Pakistan and the government will take action. He said the two countries have to fight the menace of terrorism together.

To another question, Mr. Ahsan Iqbal said that India’s role in Afghanistan was counter-productive. He, however, made it clear that Pakistan was fully capable of defending itself and no one can harm the country. Peace in South Asia will benefit all regional countries, he added.

Responding to a question if US aid-cut would impact Pakistan, the minister said that government was now working with a changed approach and the nation has defeated terrorism with its own resources and has survived hardest of times.