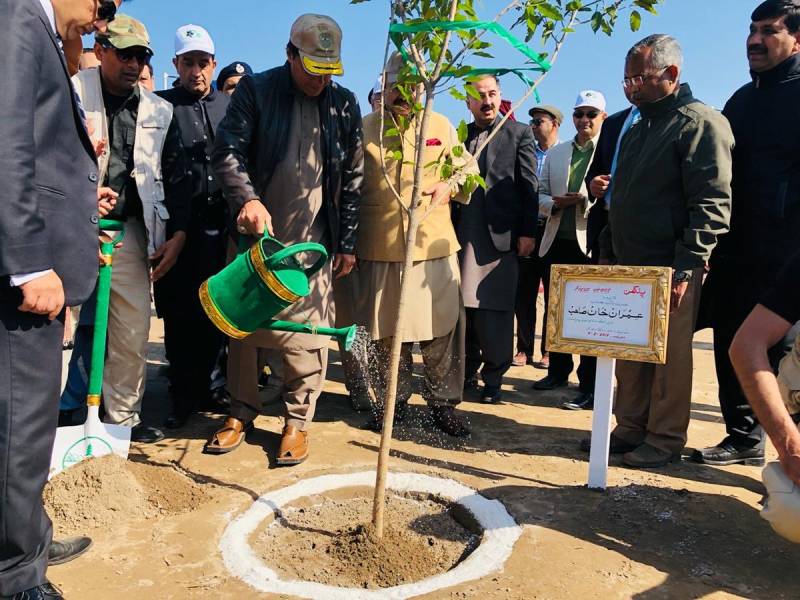 LAHORE – Prime Minister Imran Khan said that the government is set to plant ten billion trees all over the country during the next five years aimed at eliminating pollution and making Pakistan green.

Addressing the public gathering after inaugurating ‘Plant for Pakistan’ campaign at Balloki near Sheikhupura on Saturday, the premier said that “we will undertake massive plantation across Pakistan after the retrieval of lands from the grabbers and convert them into forests”.

Khan said that there is an acute shortage of forests in Pakistan as the country is at the 8th number among the countries with forest covers in the world. He assured the gathering that government is taking serious measures for reforestation in the country.

PM Imran expressed regret over the elimination of forests in Changa Manga, Mian Chunnu and Kundian by the land grabbers and vowed to reclaim these lands and convert them into forests.

He added that the pollution is aggravating in Pakistan day by day and if solid measures are not taken on time, our next generation will suffer a lot due to excess of pollution.

Trees planted in our time will benefit future generations of Pakistan; Pakistan is one of the most affected country due to global warming, never before any government paid attention to counter it, PTI government has launched campaign to save future of Pakistan.#Plant4Pakistan pic.twitter.com/DNe1RNLPBl

The PM urged the youth to widely participate in the plantation campaign to make it a success to materialize the dream of green and pollution-free Pakistan.

He directed that the forest land given on lease in Punjab should be retrieved.  He said the forests should be fully protected.

On the occasion, the prime minister was briefed about the tree plantation campaign.

We are launching our #Plant4Pakistan programme & reclaiming mafia encroached land, converting it into forests and wild life parks for our future generations to fight climate change and pollution. pic.twitter.com/yCaaahr2uB

Deputy Commissioner Nankana Raja Mansoor Ahmed said that 10,000 saplings would be planted by 2,500 school children along with Prime Minister to launch the tree plantation campaign.

The DC said the district administration had got 2,500 acres of government land retrieved from illegal occupants as per the vision of the Prime Minister to root out corruption and eliminate land grabbers, adding that a forest reserve would be developed on 1,500 acres of land while a Wildlife Sanctuary would be built on the remaining 1,000 acres of retrieved land.

The Deputy Commissioner said the WildLife sanctuary would provide a good picnic spot to visitors as well where animals and birds would be reared.

Provincial Secretary Environment Nasir Hussain Jami said that the area would become a focal point of eco-tourism in the country, adding that the initiative was part of the government’s initiatives to promote tourism in the province.