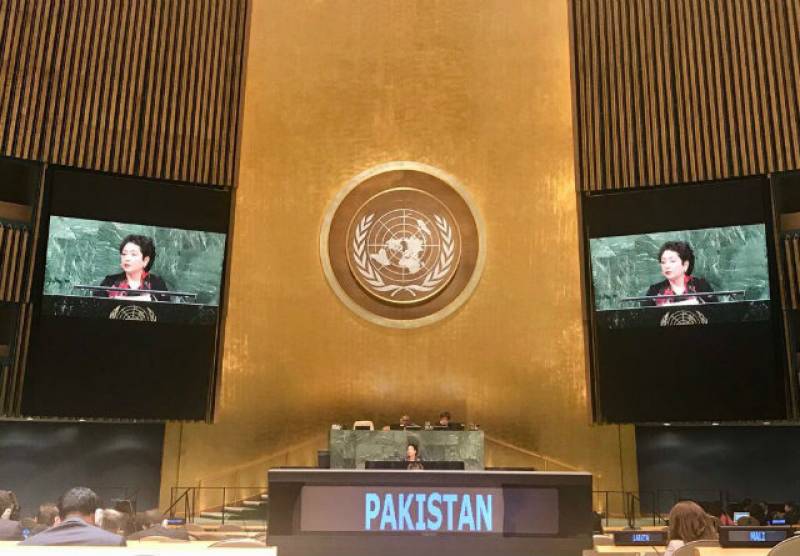 WASHINGTON - Three of Pakistan's draft resolutions on disarmament-related matters were adopted with overwhelming support by the UN General Assembly's main committee on Thursday.

In her comments, Pakistan's Ambassador to the United Nations UN, Maleeha Lodhi, described the approval of the resolutions by the 193-member Assembly's Disarmament Committee with big support of member states as acknowledgement of Pakistan's commitment to promote the objectives of regional and global disarmament.

These resolutions, she added, represented Pakistan's contribution to furthering the goals of regional and global disarmament within the framework of the United Nations and demonstrated the country's commitment to strengthening international peace and security.

The text would have the Assembly request the Conference on Disarmament to consider the formulation of principles that can serve as a framework for regional agreements on conventional arms control, and looks forward to a report of the Conference on this subject.

The Committee approved the draft by a recorded vote of 179 in favour, with 2 abstentions. India was the only to cast a negative vote. The other two Pakistani resolutions on regional disarmament and CBMs at regional level were adopted by consensus.

Earlier, on November 1, the Committee adopted a Pakistan-sponsored resolution, entitled: "Conclusion of effective international arrangements to assure non-nuclear-weapon States against the use or threat of use of nuclear weapons", which would have the Assembly appeal to all States, especially nuclear-weapon States, to work actively towards an early agreement on a common approach and, in particular, on a common formula that could be included in an international legally binding instrument.

Also by the text, the Assembly would recommend that the Conference on Disarmament actively continues intensive negotiations with a view to reaching early agreement and concluding effective international agreements to assure non-nuclear-weapon States against the use or threat of use of these armaments.

The Committee approved the draft as a whole by a vote of 122 in favour to none against, with 65 abstentions

"Disarmament and international security are in your hands and your actions as Member States result in consequences which we must all face," Ambassador Ion Jinga of Romania, who is the Chairman of the Committee, said in his closing remarks. "The manner in which you approach the Committee is the way in which it can help us all reach our common goals."

Citing the session's achievements, he said the Committee sent a total of 68 draft resolutions and decisions to the General Assembly, many approved by recorded votes. Of these, 26 were approved without a vote, accounting for a lower percentage compared with the 48 per cent approved by consensus during the Committee's seventy-second session.