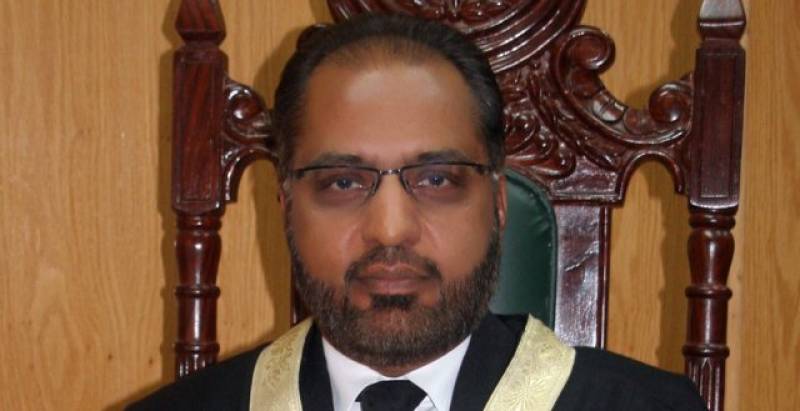 ISLAMABAD – Pakistan's Supreme Judicial Council (SJC) on Thursday recommended the removal of a puisne judge at Islamabad High Court from his office over a controversial speech against the country's superior judiciary and the premier spy agency.

The copy of the recommendation to remove Justice Shaukat Siddiqui over his controversial speech before the District Bar Association, Rawalpindi on 21 July, 2018, has been sent to President Arif Alvi.

In his bombshell address to his fellow judges and a large gathering of lawyers on July 21, Justice Siddiqui alleged that officers of the Inter-Services Intelligence (ISI) were directly involved in manipulating the judicial affairs in the country.

Commenting on the matter the next day of Siddiqui's speech while hearing a case, Chief Justice of Pakistan Justice Saqib Nisar had observed, "I read about the remarks of a judge in Islamabad and was deeply saddened".

Pakistan’s military had asked the Supreme Court to take action against Siddiqui, in a press release issued the same day, the Inter-Services Public Relations stated, “An honourable judge of Islamabad High Court of Pakistan has leveled serious allegations against state institutions including honourable judiciary and the premier state intelligence agency.

Honourable Supreme Court of Pakistan has been requested to initiate appropriate process to ascertain the veracity of the allegations levelled against state institutions. pic.twitter.com/wiruWYNZre

"In order to safeguard the sanctity and credibility of the state institutions, Honourable Supreme Court of Pakistan has been requested to initiate appropriate process to ascertain the veracity of the allegations and take actions accordingly”.

The apex court then took a suo motu notice of the matter following which Justice Siddiqui asked the chief justice to constitute a judicial commission to probe his allegations and offered to resign if he's proven wrong.

The SJC had been conducting the proceeding in the reference against Justice Shaukat Aziz Siddiqui over his aggressive speech against the country’s top spy agency.

After 1970, this is the first instance of the SJC recommending the removal of a high court judge.