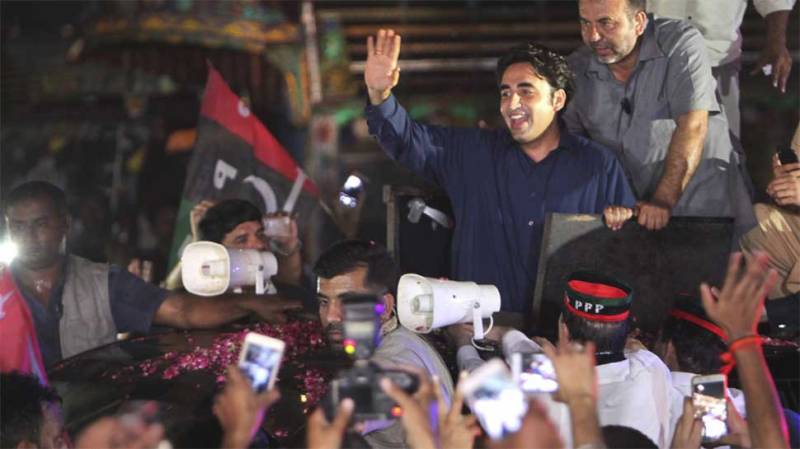 KARACHI - Pakistan Peoples Party Chairman Bilawal Bhutto Zardari fired a broadside at the functioning of the National Accountability Bureau, terming it bureau of political engineering, citing the arrest of the speaker of the Sindh Assembly, Agha Siraj Durrani.

The PPP chief addressed a press conference in Karachi on Wednesday and expressed that Durrani's arrest on trumped-up charges was highly condemnable adding that he condemns [it] in the strongest possible words.

"It was known that NAB's allegation of assets beyond means can be placed on anyone," he said adding that the allegation could be levelled in a manner similar to when a police officer plants drugs or alcohol on an innocent person and puts them behind bars.

The lawmaker said in the case of Durrani, he was taken into custody based on an allegation and there was no evidence of any corruption.

"If there had been evidence it would have been presented but raiding his house after the arrest indicates that there was no evidence," Bilawal said and added that the party could not tolerate the way Durrani's house was searched following his arrest.

He expressed displeasure over inaction by the chairman NAB over what he said was a violation of human rights and violence against women.

"This silence gives us the message that the chairman NAB condones such actions," the PPP chairman shared.

"NAB was founded for the purpose of political engineering," he alleged and warned that NAB should not be used for such purpose.

The PPP chief alleged that the 'benami' or fake bank accounts case was also a form of political engineering and wondered why the Supreme Court took the suo motu notice of such a case during the elections last year.

The politician asserted that the progress on the case was not slack, adding that a First Information Report was registered in the case, a preliminary report was presented and the case was ongoing in the banking courts.

Bilawal claimed that the slackness in the investigation was suddenly turned into a human rights case, in what he claimed was a response to a press conference held in Ghotki during the elections.

Bilawal also expressed his disdain over the inclusion of representatives of the ISI in the Joint Investigation Team, likening it with an undemocratic precedent.

Bilawal noted that as per Article 10-A of the Constitution, the Sindh chief minister Murad Ali Shah and he had the right to a free and fair trial, however, he said this right was undermined.

"The system cannot go on like this in this country, or in a democracy," he expressed.

The PPP chairman shared that another obnoxious unconstitutional effort was to transfer the fake accounts case to Rawalpindi from Karachi.

He cited a hearing of the apex court in which the Chief Justice of Pakistan had summoned an ISI representative in an open court and asked him on whose instructions Bilawal's name had been included in the case.

"I still haven't received the answer to this," he remarked and added that justice should be done and should also be seen to be done.