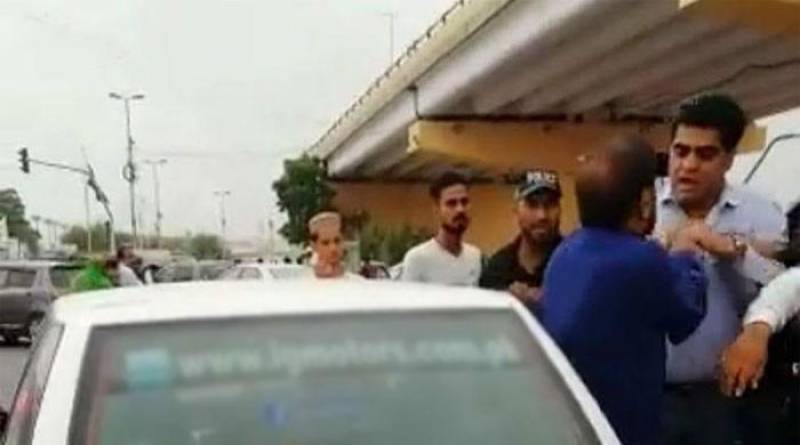 Dr Imran Ali Shah member parliament PTI on his quest to end protocol culture. Gave his tribute to a citizen who dared cross his SUV in Karachi pic.twitter.com/uzkaY7FYsu

According to some social media users, Imran Shah allegedly thrashed the local man who tried to cross MPAs luxury vehicle.

Meanwhile, PTI leader Faisal Vawda termed this act highly unacceptable behaviour in any case, saying no one is above the law. “I apologise on behalf of my party MPA and rest assured justice will be done and will make sure it’s not repeated again.”

PTI—during its election campaign—has advocated against VIP culture, movement and protocol. The chief of the party and PM-in-waiting Imran Khan has refused to take any protocol.

PTI has issued a show cause notice to MPA Imran Shah.

No one is above the law is the basic premise of Imran Khan’s Naya Pakiatan. An elected MPA taking the law into his own hands,for whatever reason,is completely unacceptable.We condemn this behaviour and expect strict action to be taken.
Show cause notice has been issued to the MPA pic.twitter.com/isGlFKovcV

I have seen the video and am probing the matter, and simultaneously we are issuing a show cause notice to Dr. Imran Ali Shah.
Once all the facts are known we will let everyone know of the future course of action.

Netizens have lambasted the cruel behaviour of the MPA and demanded PTI to take stern disciplinary action against the culprit.

However, newly-elected MPA Dr Imran Ali Shah has given a clarification on Twitter and said: "Being a responsible citizen and a member of the provincial assembly I have more responsibility towards my people, The viraled clip is half-truth and misleading. I cannot turn a blind eye on someone doing injustice to a citizen for any reason."

PTI MPA from PS-129 @dr_imranshah assaults a citizen near Stadium Road over crossing his SUV. Guards of the MPA kept abusing the citizen.#NayaPakistan pic.twitter.com/9Y7TcaBFR0