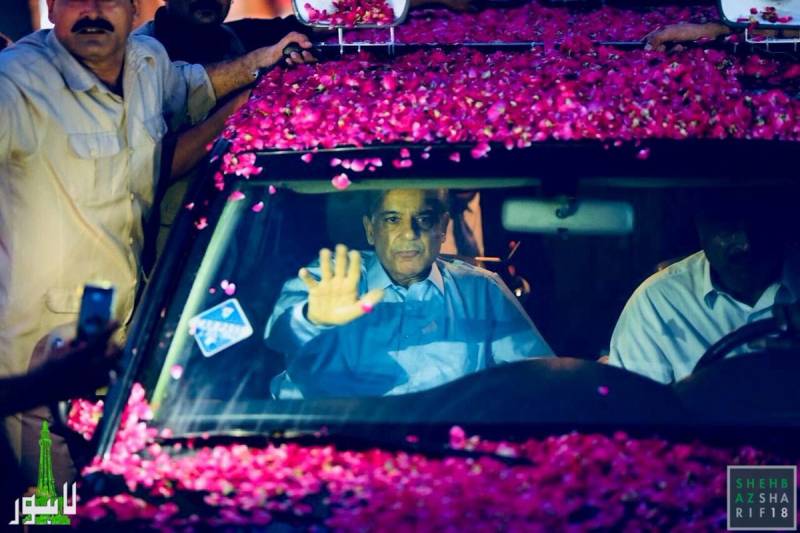 The meeting was held in the room of Superintendent Jail. Strict security measures were adopted on the occasion.

Law enforcement agencies did not allow the motorists to use the road in front of the jail during the visit.

Earlier today, the former Punjab chief minister lashed out at authorities for their decision to try the ousted PM and his daughter Maryam Nawaz inside Adiala jail and vowed to turn every campaign rally for his election into a protest.

“We’ve come to know Nawaz Sharif and Maryam Nawaz have been taken to Adiala jail and they’ll be tried inside the jail. Only terrorists are tried inside a jail,” Sharif told a press conference in Lahore on Saturday.

“This is wrong. What message do you want to send across the country? We faced a similar trial during Musharraf’s’ dictatorship” he said.

LAHORE - Pakistan Muslim League-Nawaz (PML-N) president Shehbaz Sharif on Saturday lashed out at authorities for their ...

On Friday night, the former premier and his daughter, who were convicted in the Avenfield Apartments reference, were arrested upon their arrival in Lahore and were subsequently taken to Islamabad in a chartered flight. The father-daughter duo were then separated and taken from the Islamabad International Airport in two convoys to the Central Jail in Adiala, Rawalpindi.