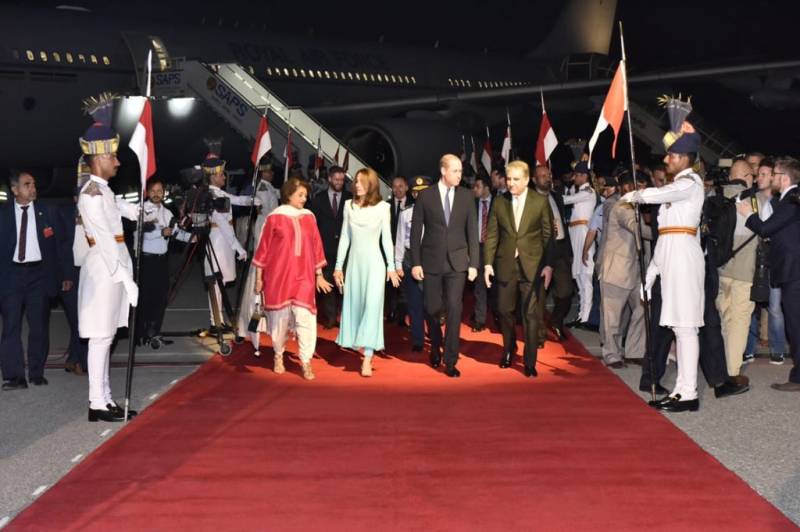 ISLAMABAD – Duke and Duchess of Cambridge, Prince William and Kate Middleton Monday arrived here to a red-carpet welcome on their first five-day visit to Pakistan.

The plane carrying the British royals landed at the Nur Khan airbase. Foreign Minister Shah Mehmood Qureshi welcomed the guests along with the British High Commissioner in Pakistan and other officials.

Kate Middleton, also known as an expert in the art of diplomatic dressing, appeared from the VVIP Aircraft in a light blue frock while Prince William wore a navy blue suit.

Two traditionally attired children presented bouquets to the guests, who received the same with great warmth and also shared words of affections with the innocent souls.

The static guards saluted the guests before they left the airbase to pursue a hectic agenda ahead during next four days.

During the visit ending October 18, the royal couple will meet President Arif Alvi and Prime Minister Imran Khan, who will also host a luncheon reception for the royal guests.

After attending different events at an Islamabad school and at Trail -5 of Margalla Hills, the couple will depart for Chitral to attend the community and environment-related events.

Elaborate arrangements have been made to give a befitting reception to the guests who, during their visit, will also see the specially decorated rickshaws with the theme of the royal visit and popular truck art, besides enjoying the flavors of Pakistani cuisine.

On Thursday, the royal couple is scheduled to visit Lahore, where they will meet the Punjab governor and chief minister, besides visiting the SOS Village.

They will also attend different events at the National Cricket Academy and Badshahi Mosque, besides visiting the Shaukat Khanum Hospital.

In a video message, British High Commissioner in Pakistan Thomas Drew had said that the royal couple would like to see the ‘breadth and depth’ of Pakistan, including “the modern leafy capital in Islamabad, the vibrant city of Lahore, the mountainous countryside of the north and the rugged border region of the west”.

The visit , he said, would largely focus on showcasing Pakistan as it was today –a dynamic, aspirational and forward looking nation.

Most importantly, he said they hoped to meet as many Pakistanis as possible during the course of the visit, particularly the youth who were shaping the future of the country.

The royal visit to Pakistan came after 2006, when Prince Charles and Duchess of Cornwall Camilla Parker visited the country. In 1997, Queen Elizabeth visited Pakistan to attend the Golden Jubilee celebrations of the country wherein she had also addressed the joint parliamentary session. Princess Lady Diana, the mother of Prince William, visited Pakistan in 1991, 1996 and lastly in 1997, just a few months before her tragic death.

According to an official statement, the “duke and duchess’s programme will pay respect to the historical relationship between Britain and Pakistan, it will largely focus on showcasing Pakistan as it is today – a dynamic, aspirational and forward-looking nation”.

It added that from the modern leafy capital Islamabad to the vibrant city of Lahore, the mountainous countryside in the North, and the rugged border regions to the West, the visit will span over 1000km, and will take in Pakistan’s rich culture, its diverse communities, and its beautiful landscapes.

Throughout the tour, the couple will attend programmes which empower young people and organisations that help ensure they have the best possible start in life.

🎥 Watch The Duke and Duchess of Cambridge join His Highness The Aga Khan at a special event organised at the Aga Khan Centre @AKDN, ahead of #RoyalVisitPakistan later this month 🇵🇰 pic.twitter.com/OEeYR0QqOg

— The Duke and Duchess of Cambridge (@KensingtonRoyal) October 3, 2019

Earlier this month, the royal couple joined Prince Karim Aga Khan at a special event organized at the Aga Khan Centre, at Kings Cross London, ahead of Their Royal Highnesses’ official visit to Pakistan from 14-18 October 2019.

Hosted by Aga Khan, the event at the Aga Khan Centre celebrated Pakistan’s culture and heritage, and the contributions of the Pakistani diaspora to British society.

British High Commissioner to Pakistan Thomas Drew has expressed optimism that the visit of Duke and Duchess of Cambridge to Pakistan will help promote historic relations between Pakistan and the United Kingdom.

In a video statement, he said it will be an exciting program and will focus largely on today's Pakistan and its dynamic, aspirational and forward-looking nation.

We’re in the final countdown to the arrival in Pakistan of the Duke and Duchess of Cambridge. Here is a flavour of what to expect. #RoyalVisitPakistan pic.twitter.com/zvg0MkTkNa

Drew said the royal couple would like to see the length and breadth of the country, ranging from modern leafy capital Islamabad to vibrant city of Lahore, the mountainous countryside of North and rugged border region of the West.

"They will get the flavor of enormous opportunities in the hands of Pakistan's young population as well as the country responding to the challenges like climate change."

The British High Commissioner added Prince William and Princess Kate Middleton hope to meet as many Pakistanis as possible during the course of the visit, especially the young people who would shape the country's future.

They are looking forward to building a lasting friendship with the people of Pakistan. He hoped they would get a very warm welcome during visit to Pakistan, he further said.