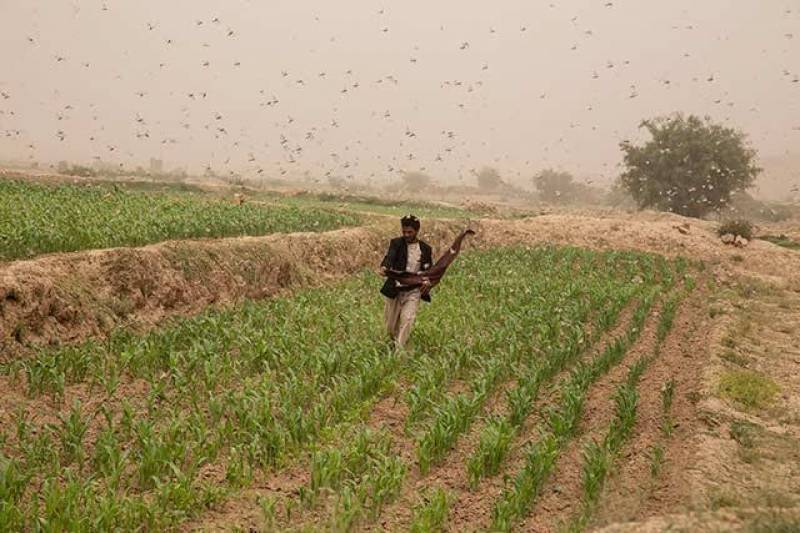 LAHORE -  A massive locust invasion have ruined number of crops in Kasur while farmers said that the administration has not taken any measures to prevent it.

The devastating situation has put the farmers, who have resorted to anti-locust spray and music to throw them out of their fields, into deep distress.

The city has came under the locust swarms attack nearly after fifty years. The crops of wheat, potato and other vegetables were damaged in the recent attack.

Earlier this month, Prime Minister Imran Khan declared a national emergency in response to swarms of desert locusts in the areas of South and upper Punjab of the country.

"We are facing the worst locust infestation in more than two decades and have decided to declare a national emergency to deal with the threat," Information Minister Firdous Ashiq Awan had said.

The desert locusts, which believed to arrive in Pakistan from Iran in June and have already ravaged cotton, wheat, maize and other crops.

Their potential for large-scale destruction is raising fears of food insecurity.

National Food Sec­u­rity Makhdoom Khusro Bak­h­tiar said the locust swarms were currently on the Pakistan-India border along the Cholistan and were previously in Sindh and Balochistan, Dawn reported.

The PM pledged to tackle the issue, adding that protection of agriculture and farmers was the government's priority.

"The federal government will take all possible steps and provide required facilities to protect crops from any possible danger with special focus on the danger of locust,” Khan said.

The last time Pakistan saw a serious threat of locusts was in 1993. Currently, locusts swarms are affecting neighbouring India and countries in East Africa.