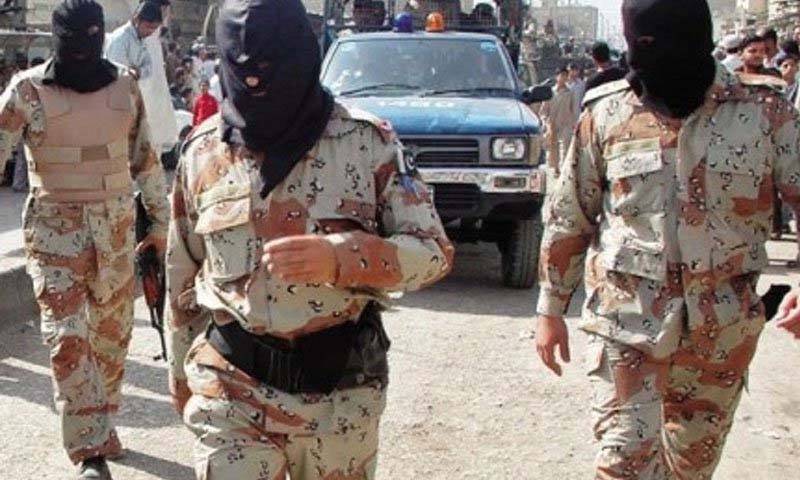 According to the Tv report, the personnel of paramilitary force entered the Nine-Zero office and Khusheed Begum Memorial Hall after surrounding the area in Karachi’s Azizabad neighbourhood, a stronghold of the Altaf Hussain-led MQM party.

Sources told Geo News that Azeem Farooqui and Sufian Yousuf were released after a brief interrogation. However, Qamar Mansoor and Rabita Committee’s newly appointed in-charge Kaiful Wara have been taken to an undisclosed location for further interrogation. Eight Rangers vehicle were used in the search operation. Confirming the arrest of Qamar Mansoor and Kaiful Wara, MQM’s central leader Wasay Jalil said that the raid was carried out without any search warrant. He said he was not aware of any other arrests made during the Rangers raid.

Condemning the raid, Jalil said that Rangers’ operation was only directed towards MQM and not against terrorists and criminals.

Meanwhile, workers and supporters of the MQM gathered in large numbers at the Nine-Zero soon after the Rangers had left the area. They were chanting slogans in favour of the party and its chief Altaf Hussain.

In a similar search operation, Rangers had arrested dozens of MQM workers among wanted suspects earlier this year.

Those apprehended tonight from 90, have been arranging and facilitating hate speeches against peace of Karachi.

Later, a spokesman for Rangers said in a statement that the arrested MQM leaders were facilitating hate speeches to disturb Karachi’s peace. Personnel of Rangers were being targeted in 'hate speeches', he added.

The spokesman said that Rangers personnel are playing their role in restoring peace in the port city.