Mysterious case of Naqeeb Mehsud, the alleged terrorist killed in a police 'encounter' 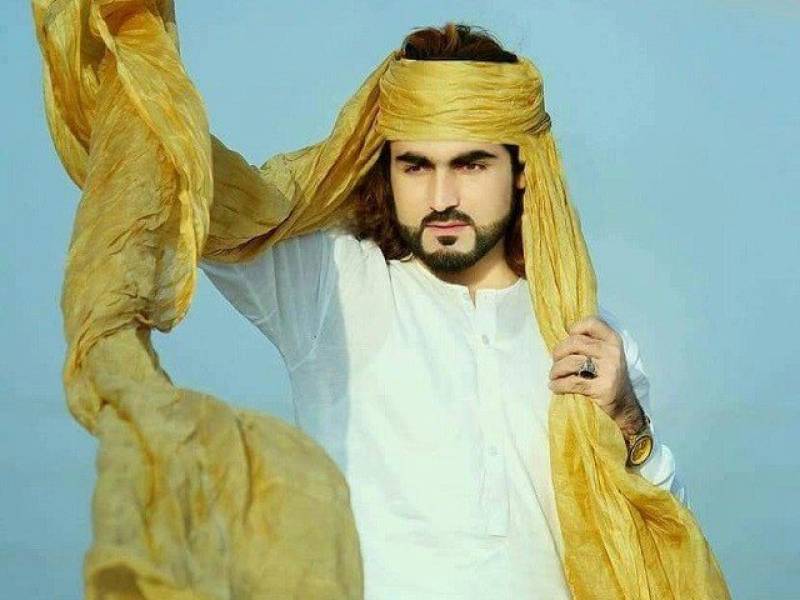 According to Noor Rehman Mehsud, Naqib's cousin, the family went to Sohrab Goth police station to register a complaint against his kidnapping, but the police refused to register an FIR. "We only recognized Naqib after police had released the pictures of suspects," he further added.

Noor said that they went to Sohrab Goth Edhi Center to verify the media reports. Despite the verification by the center's officials, the police only gave the certificate to collect the body after four days.

Claims by the Police

Senior Superintendent of Police (SSP) Rao Anwaar, who supervised the encounter, has rejected the family's claim that Naseem was abducted before he was shot dead in an encounter.

Naqeeb was involved in martyring a junior commissioned officer Muhammad Alam of Pakistan Army in 2007, and was also involved in the Dera Ismail Khan jailbreak in 2013, Anwaar told The News. He added that he had also killed his cousin Aijaz Mehsud in 2009 after he became suspicious of him for spying for the army.

The SSP also told the media outlet that Naqeeb had served as a gunman for a top TTP leader Baitullah Mehsud from 2004 to 2009 and was motivated by his brother-in-law Sher Dawood Mehsud to join the terrorist group. According to the officer's account, the dead was trained by the TTP's Ustad Ali.

After the news emerged of Naqeeb's death, a large number of people started posting condolences on social media. Many social media users have accused SSP Anwar of staging fake encounters for personal benefits.

Gibran Peshimam, another social media user, has shared, "Tales of police extorting Pashtun families who move to Karachi to live a better and safer life have been rampant the last few years. Pay up, or you're Taliban.

One officer is particularly notorious.

The case of #NaqeebMehsud cries for justice - for him and those before him."

Tales of police extorting Pashtun families who move to Karachi to live a better and safer life have been rampant the last few years. Pay up, or you're Taliban.

One officer is particularly notorious.

The case of #NaqeebMehsud cries for justice - for him and those before him https://t.co/JBXg4yu5Vg

People from all the fields of life are asking for a judicial inquiry.

Jalal Khan, a PTI worker, condemned the killing in a tweet.

I vehemently condemn the corrupt and inept sindh police for the extra judicial killing of an innocent Waziristani brother of mine. He leaves three kids behind. His name is #NaqeebMehsud and his crime was that he was a tribal pukhtoon. #JusticeForNaqeeb pic.twitter.com/GQrRs7SGgz

A judicial inquiry into the matter should be set up, to expose the culprits behind the mysterious killing of a young Naqeeb Mehsud in Karachi. No one shall be above the rule of law. It is believed he was killed in a fake encounter by Sindh Police. Condemn such acts #NaqeebMehsud pic.twitter.com/lDH5Qx3rhl

Massive protest against killing of #NaqeebMehsud who Police claimed to be a militant however family claims that Naqeeb was abjucted & then killed in fake encounter. We demand a judicial inquiry. Why should victim families always carry burden of justice @BBhuttoZardari pic.twitter.com/uWWuFmQqJT

In a tweet, the PPP chairman shared that he had asked Sohail Anwar Siyal, Sindh's Home Minister, to conduct an inquiry.

Have asked @siyal_anwar to conduct an inquiry into this case. https://t.co/8v26Mz5IlZ

Upon Bilawal's direction, Sindh's Home Miniter Sohail Anwar Siyal has appointed DIG Police South Zone, Karachi, to conduct an inquiry into the matter and to submit findings within 15 days.

I have appointed DIG police south zone Azad Khan as I.O in Naqeeb Mehsood case, he is well reputed police officer I'm sure justice will be done. pic.twitter.com/k0kxmyfrsO 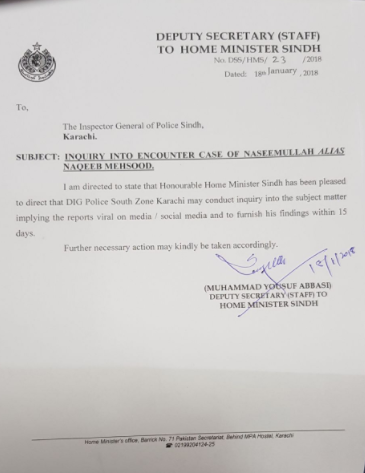 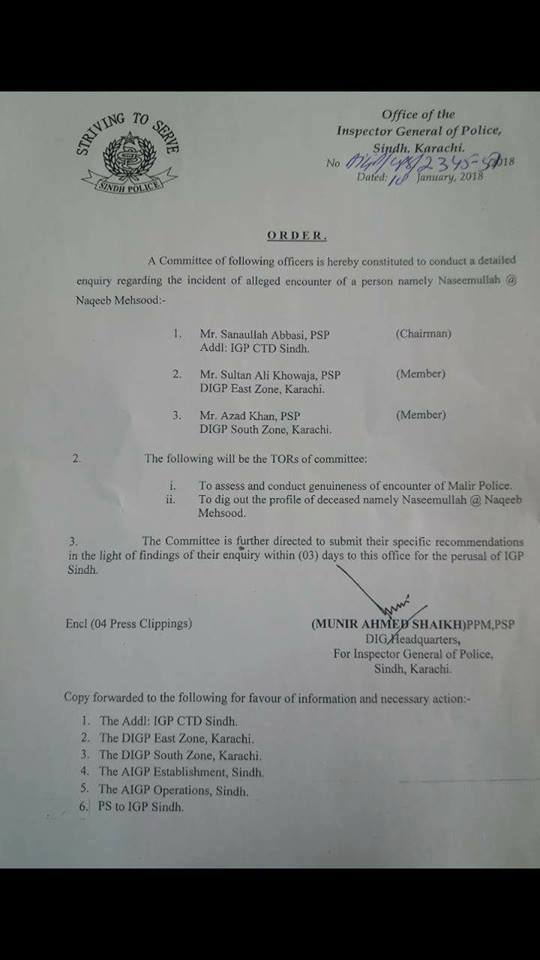 A resolution has been submitted to Sindh Assembly by MPA Khurram Sher Zaman.

“I will be a raising voice for Naqeeb in today’s Sindh Assembly session,” the MPA shared earlier, claiming that encounter specialist Rao Anwar was the one who shot and ultimately killed Naqeeb.

“I couldn’t sleep all night because I couldn’t get Naqeeb out of my mind. It’s really sad to see how our law enforcement agencies treat citizens. These fake encounters must end. We demand justice for Naqeeb,” he added.

PTI's MNA Muraad Saeed has written a letter to CM Sindh Murad Ali Shah requesting for a judicial inquiry into the matter. 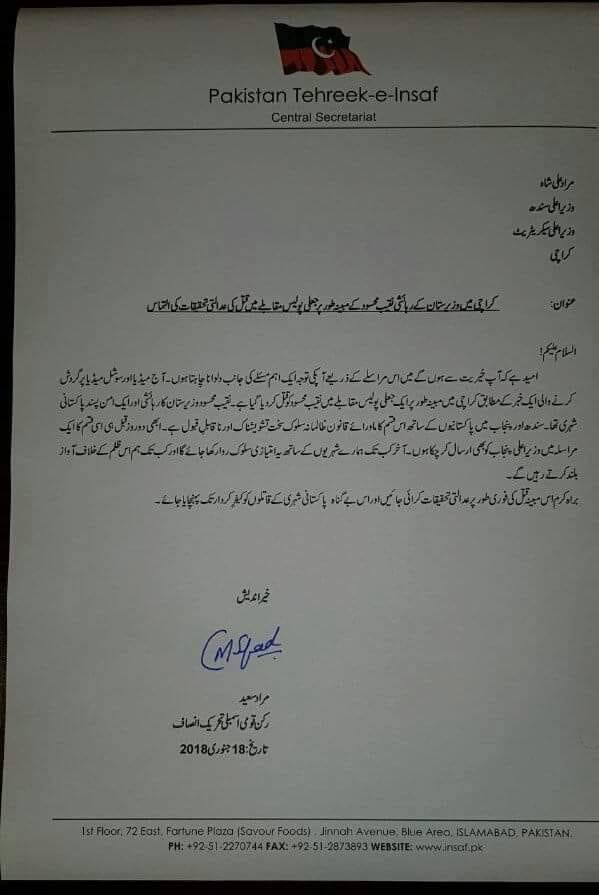 This news story is developing and will be updated.