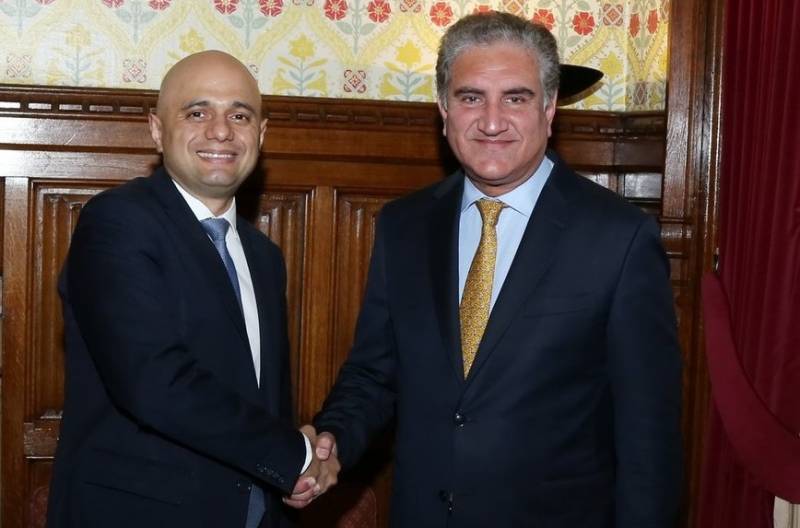 Pakistan and the UK reaffirmed their continuing collaboration between the law enforcement agencies of the two countries at the operational level and counter-terrorism measures in accordance with the National Action Plan.

Qureshi thanked the British Home Secretary for the technical assistance and the support that was being provided by the British government.

They agreed to continue their governments’ joint efforts for developing the capacity building of public departments and information sharing as part of their commitment to achieve greater success in the global fight against terrorism, organized crime and illegal migration.

Both the sides reiterated their resolve to curb money laundering practices and to build upon the justice and accountability partnership arrangement between the two countries.

Javid expressed the British government’s desire to be seen as a partner of Pakistan in their joint efforts in anti-money laundering and to tackle organized crime.

Both the ministers underscored the importance of working together for the repatriation of stolen financial assets abroad and to intensify domestic efforts for return of this wealth in accordance with international legal instruments and conventions against corruption.

Qureshi and Javid also expressed firm commitment to inhibit elements who were involved in carrying out malicious campaigns against Pakistan on the British soil to sow the seeds of discord. Matters relating to immigration and visa were also discussed during the meeting.

Foreign Minister Qureshi also apprised the Home Secretary about the liberalization of Pakistan’s visa regime that was being done to facilitate British nationals particularly business people and tourists.

The foreign minister underscored the need for a dialogue on legal migration which would be in line with the emerging requirement of human resource.

Pakistan is rich in human capital, he said.