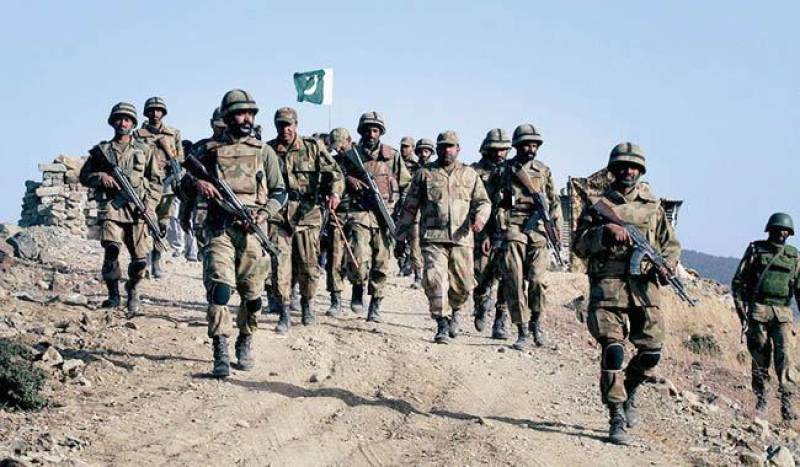 LANDIKOTAL/RAWALPINDI - Pakistani forces killed several militants affiliated with Jamaatul Ahrar after it bombed their hideouts in the Rena area of Afghanistan situated near the Pakistan border on the second consecutive day on Saturday.

According to reports, Pakistani troops successfully targeted the hideouts of Jamaatul Ahrar across the border and inflicted huge casualties on them.

Afghan sources informed that a high-value target known for recruiting terrorists and training suicide bomber, Rehman Baba, was also gunned down, further adding that at least 12 terror sanctuaries, including a hideout and weapon depot camp of Jammat-ul-Ahrar`s commander, Wali, were also pounded by the forces, Geo News reported.

Pakistani forces targeted terrorists based across the Pak-Afghan border, military sources said late Friday, following a week of deadly terrorist attacks in the country in which over 100 people were killed.

Just hours before the military operation the first operation, Pakistani army had summoned Afghan diplomats to its headquarters in Rawalpindi and handed over a list of terrorists involved in staging attacks inside Pakistan.

It is pertinent to mention that Jamaat-ul-Ahrar which has safe havens in Afghanistan claimed the responsibility for repeated acts of terrorism across Pakistan in the past few days.

Pakistan has repeatedly warned Afghan authorities to prevent the use of their soil for terror activities in Pakistan.

Pakistan has seen a sudden increase in terror attacks with almost 9 attacks in one week. The attacks are largely being seen as a well-planned and orchestrated attempt of the ‘enemies’ to destabilise Pakistan as the country makes several breakthroughs and other developments.

On Thursday, at least 88 people were martyred when a suicide bomber attacked the crowded Sufi shrine of Lal Shahbaz Qalandar in Sehwan, injuring up to 343 others, according to DG Health Services Sindh.

On February 15, three suicide bombers targeted Khyber Pakhtunkhwa and the adjoining tribal areas leaving around seven people dead. One of the incidents occurred in Peshawar where a suicide bomber riding a motorbike hit a vehicle carrying civil judges, while two other suicide bombers blew themselves up at separate locations in Mohmand Agency.

Prior to these, a suicide attack in Lahore on February 13 killed 14 people and wounded over 60 others.

On February 12, cameraman Taimur from Samaa News was killed when the channel’s DSNG van was attacked in Karachi.