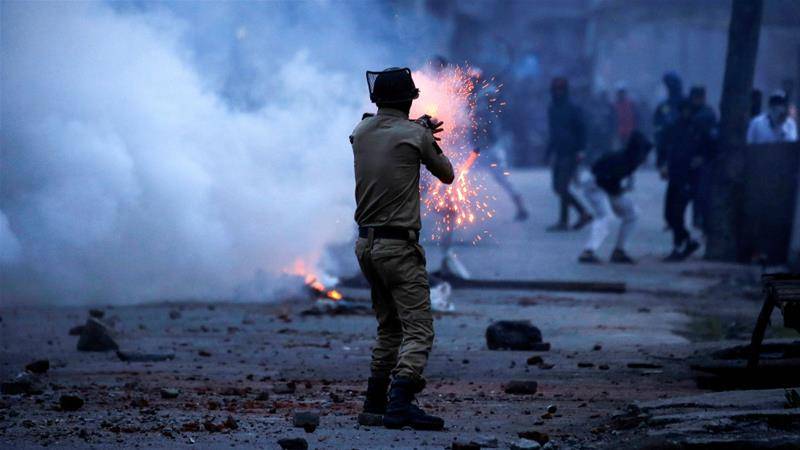 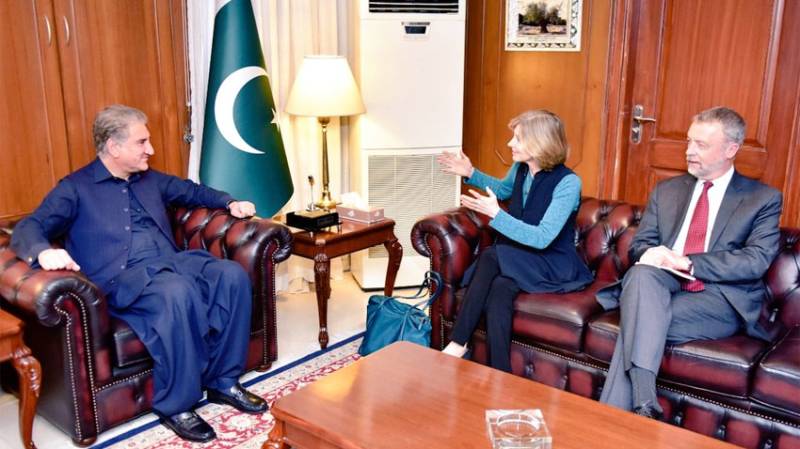 ISLAMABAD – The British lawmakers, whom India denied a visit to Kashmir, stated on Wednesday that situation in the Occupied Valley had turned into a serious human rights issue, demanding all states under the United Nations Charter to notice and act.

Lawmakers Debbie Abrahams and Imran Hussain in a press conference along with Foreign Minister Shah Mehmood Qureshi at the Foreign Office, called for an immediate response by international community to take urgent notice of worsening human rights situation in Indian Occupied Jammu and Kashmir.

Debbie Abrahams, who chairs All Parties Kashmir Group, was deported from Delhi a day ago for her open stance on the ongoing human rights situation in Kashmir.

Abrahams said the group members would report back to their parties on India denying the visit and Pakistan allowing for an independent monitoring of its respective side of Kashmir.

“We are not here for sight-seeing, but because that we are deeply concerned about the human rights situation in Kashmir, and we are constantly raising it,” she said.

She hoped that India would take the opportunity to reflect on Pakistan’s approach to address the issue and allow visit of the group, which she said was “not anti-India or pro-Pakistan, but pro-human rights”.

NEW DELHI - A British MP critical of the government's decisions on Kashmir claimed on Monday that she had been denied ...

Abrahams, who led a delegation of British MPs in a meeting with the Foreign Minister here, stressed that international community needed to take the issue on priority and “make sure that human rights are not negotiable, regardless of religion, ethnicity, age and gender”.

She said the Resolutions of UN Security Council were still in place and relevant for the current Kashmir situation.

To a question on UK’s response on looming threat of genocide in Indian Occupied Jammu and Kashmir, she said the independent group did not represent the British government and could not speak on its behalf. However, she said the group had host of ways to draw attention to the relevant authorities in this regard.

“We as parliamentarians will lobby our governments towards the issue of geo-political significance as two nuclear powers [Pakistan and India] could come to loggerheads with each other,” she said.

She mentioned the commitment of Pakistan government to resolve the issue, contrary to India’s attitude of not allowing international observers to monitor the situation.

Deputy chair of All Parties Kashmir Group MP Imran Hussain said the Kashmir issue was not limited as a bilateral matter between Pakistan and India, but became a human rights issue that needed serious attention by the world community.

He said if India had nothing to hide about the situation in Kashmir, the independent group would have been allowed to visit the Occupied valley.

He termed India’s Public Safety Act as “draconian and illegal”, saying it was the moral duty of the world not to shy away from the issue”.

“We must help to assist and resolve the issue and the Indian government should realize about its irresponsible role,” he added.

He said lockdown in Occupied Kashmir had made situation cumbersome for innocent civilians who could not even contact their relatives on other side of the Valley. Hussain said the UN Human Rights chief would also soon visit Pakistan.

Foreign Minister Qureshi said India had revealed its sham face of secularism and democracy by denying visit of an independent foreign group on Kashmir.

He mentioned that All Parties Group of British parliamentarians presented a credible report on Kashmir situation in 2018, highlighting the ongoing atrocities by Indian security forces.

He expressed hope that House of Commons, European parliament and US Congress would raise voice, similar to Pakistan where the parliament twice passed unanimous resolutions on Kashmir.

“The world’s parliaments should raise voice and back the international human rights organizations speaking on Kashmir,” he said.

He expressed fear that the disputed area could become a nuclear flashpoint with high prospects of making a global impact.

To a question on slow progress on Kashmir’s resolution, he said the government had revived the issue which was put on back-burner for several years.

“After 54 years, we have taken up the issue at UN Security Council and thus, a beginning has been made,” he said, adding that the recent statement of UN Secretary General Antonio Guterres about UNSC Resolutions of being still relevant today was a great endorsement of Pakistan’s stance. Qureshi dismissed a statement by Indian External Affairs Minister S. Jaishankar who said only one of the two democracies would decide about the fate of Kashmir, saying that decision by the “so-called democracy” had already been taken on August 5 which was rejected by Kashmiris.

“Today, a huge segment of population including Muslims and other minorities call the Citizenship Amendment Act a folly of India,” he said.