Opposition announces protest in and outside parliament after Eid 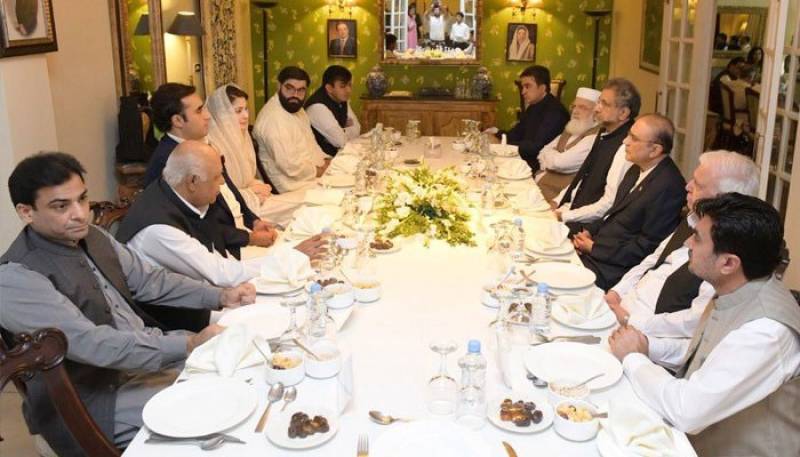 ISLAMABAD – The opposition parties Sunday decided to hold protest demonstrations in and outside the parliament against the government after Eidul Fitr.

"We have also decided to hold an All Parties Conference (APC) after Eid," said PPP Chairman Bilawal Bhutto Zardari in a press conference after the high-level huddle held at the Zardari House.

The PPP supremo said that every single political party will also hold separate protests against the disastrous policies adopted by the incumbent government.

The APC will be convened by the Jamiat Ulema-e-Islam (Fazl) leader Maulana Fazlur Rehman to discuss opposition's future course of action in regards to putting up a front against the Prime Minister Imran Khan's government.

JUI-F chief Maulana Fazlur Rehman said that the APC will be called in a bid to reach a consensus over shared cause and course of action.

Pakistan Muslim League-Nawaz stalwart Shahid Khaqan Abbasi said that the opposition believes that the government has failed to deliver.

Pashtun Tahaffuz Movement's Mohsin Dawar said that the matters of the state should be run as according to the constitution. "The state of Pakistan can no more run by defying the constitution. We all have consensus over one point that all policies should be made by parliament."

Earlier, Prime Minister Imran Khan responding to the news of opposition parties meeting over iftar dinner stated that the economy is being used as a source of blackmail by corrupt political mafia.

The opposition parties also discussed the economic situation of the country besides formulating a strategy against the government in the Iftar dinner.

The opposition is planning to give a tough time to the government after Eid-ul-Fitr.