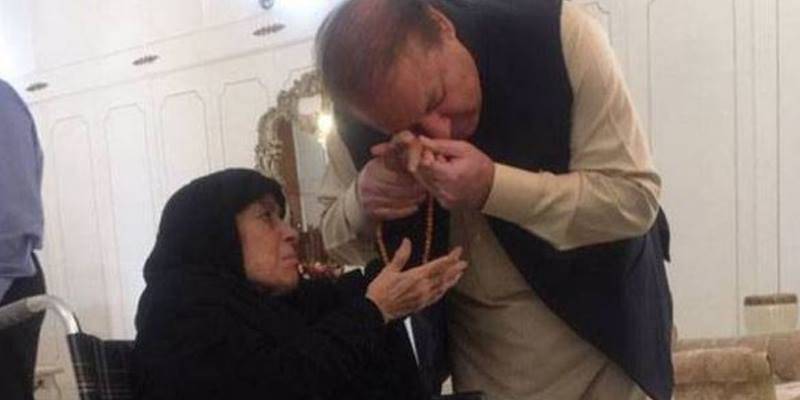 LAHORE – Former prime minister Nawaz Sharif arrived at his family hometown, Jati Umra and met his mother after getting released from the Adiala jail on Thursday.

Nawaz’s mother was grateful to Allah for the return of her son and prayed for his son, who spent some 68 days behind the bars before finally walking out free on the directives of the Islamabad High Court.

Shamim Begum was happy that Allah has returned joy to the family. She prayed for her children’s long and healthy life; the moments when the elder Sharif met his mother were caught on camera as well.

Earlier, Pakistan Muslim League Nawaz president Shehbaz Sharif had telephoned his mother to tell him about Nawaz’s release. Speaking to her, Shehbaz said, “Mother, your son’s sentence has been suspended.”

Meanwhile, special meals were prepared at the palatial Jati Umra on the return of Nawaz Sharif upon Shamim Begum’s directions.

Jubilations erupted among the PML-N ranks on Wednesday as the Islamabad High Court suspended the prison sentences of the former prime minister, his daughter Maryam Nawaz and son-in-law Safdar, in the Avenfield reference.

A two-member bench, comprising Justice Athar Minallah and Justice Miangul Hassan Aurangzeb, gave the judgment on petitions filed by Sharifs challenging the Avenfield verdict against them.

The IHC also ordered the accused to submit surety bonds worth Rs 0.5 million each.

The petitions were filed by the Sharif family against their conviction in the Avenfield reference filed by the National Accountability Bureau in line with the Panama papers case verdict.

They accused were imprisoned in the Adiala jail after Nawaz Sharif and his daughter returned to the country from London.