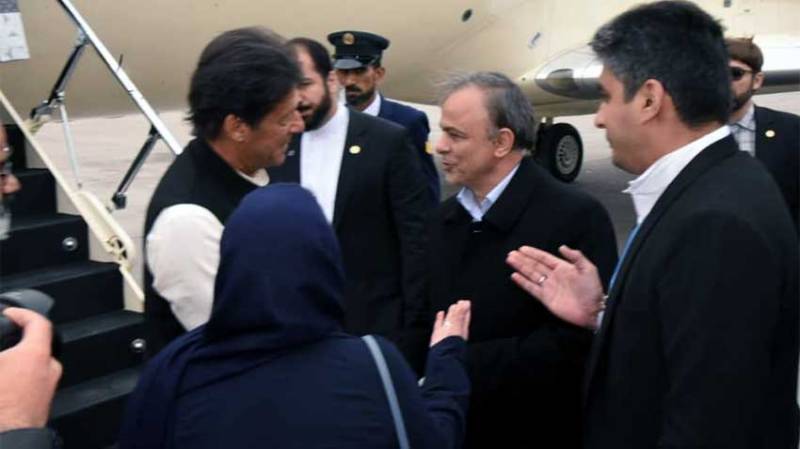 ISLAMABAD – Prime Minister Imran Khan on Sunday evening arrived in Mashhad for a brief stop-over before proceeding to Tehran on a two-day official visit to Iran on the invitation of President Hassan Rouhani.

This is the first visit of Prime Minister Imran Khan to the neighbouring Islamic nation.

During the visit, the PM will call on Iranian Supreme Leader Seyed Ali Khamenei and hold detailed consultations with President Hassan Rouhani.

Imran Khan will also meet members of the Iranian and Pakistani business community in Iran.

Imran Khan will also meet members of the Iranian and Pakistani business community in Iran.

Prime Minister Imran Khan to pay a two-day official visit to Iran from today. He is visiting Iran on the invitation of Iranian President Hassan Rouhani. pic.twitter.com/5rPXLq5i5H

Pakistan’s relations with Iran are marked by close historic and cultural linkages and strong people to people exchanges. The PM’s visit to Iran will further the close bilateral relationship between the two countries.

Talking to a private news channel, he said the leadership of both countries would discuss the establishment of a mechanism to prevent such incidents in future by securing the border. Qureshi said Pakistan has always supported Iran in difficult circumstances and expects the same from Tehran.

He said Pakistan has shared actionable intelligence with Iran and even the locations of anti-Pakistan elements' training camps across the border have been pointed out.

Shah Mahmood Qureshi hoped that Iran would take visible action against these anti-Pakistan elements operating from its soil and conspiring to undermine the bilateral relations.

The minister said he had a detailed telephonic conversation with his Iranian counterpart and conveyed the sentiments of Pakistani nation, who in return, condemned the incident and assured to extend all out support to Pakistan in punishing the perpetrators.