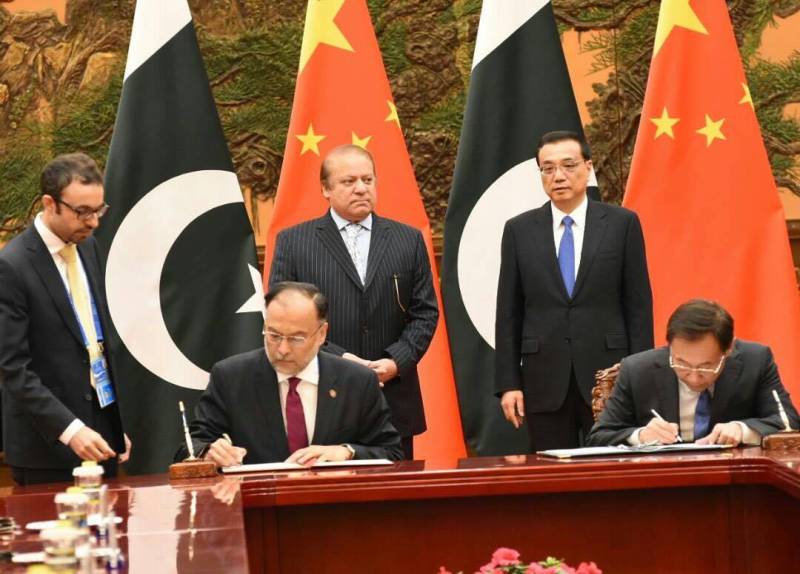 The government of Pakistan and China signed multiple Memorandum of Understandings during the recent visit of Pakistani prime minister Nawaz Sharif to China to enhance the bilateral relationship between the two countries.

Both signed agreements worth $28 billion to immediately kick-start early harvest projects, while projects worth $17 billion, which are in the pipeline, will follow as soon as the required studies, processes and formalities are completed. The groundbreaking and signing of financial agreements have demonstrated that there is a strong will on both sides to implement the portfolio of $45 billion agreed under the CPEC framework as early as possible to help Pakistan meet its energy needs.

The agreements and MOUs signed are as under:

1. The Economic and technical cooperation agreement between China and Pakistan.

2. Exchange of notes of a feasibility study of the demonstration project of the DTMB.

3. Exchange of notes on the provision of anti-narcotics equipment.

4. Exchange of notes on the provision of law enforcement equipment.

5. Exchange of notes on feasibility study of Gwadar hospital

6. MoU on the provision of Chinese governmental concessional loan for second phase up-gradation of the Karakorum Highway (Havelian to Thakot).

7. MOU on the provision of Chinese governmental concessional loan for Karachi-Lahore Motorway (Multan to Sukkur).

9. MoU on the provision of Chinese governmental concessional loan for Gwadar international airport.

10. Protocol on banking services to an agreement on trade in services.

11. MoU on the provision of material for tackling climate change.

12. A framework agreement on cooperation on major communications infrastructure project.

13. MoU on cooperation between NDRC of China and Ministry of Planning Development and Reform of Pakistan.

14. MoU on Pro Bono Projects in the Port of Gwadar Region.

15. MoU on the establishment of the China-Pakistan joint cotton biotech laboratory.

16. The framework agreement between the National Railway Administration, China and the Ministry of Railways, Pakistan on joint feasibility study for up-gradation of ML1 and establishment of Havelain dry port of Pakistan Railways.

17. Protocol on the establishment of the China-Pakistan joint marine research centre.

18. MoU on cooperation between the State Administration of Press, Publication, Radio, Films and Television of China and Ministry of Information, Broadcasting and National Heritage of Pakistan.

19. Triple party agreement between China Central Television and PTV and Pakistan Television Foundation on the re-broadcasting of CCTV-NEWS/CCTV -9 Documentary in Pakistan.

20. Protocol on the establishment of sister cities relationship between Chengdu city Sichuan Province of PRC and Lahore city.

21. Protocol on the establishment of sister cities Relationship between Zhuhai city, Guangdong province and Gwadar city.

22. Protocol on the establishment of sister cities relationship between Karamay City, XianjianUgur, and Gwadar city.

23. The framework agreement between NEA and MoPNR on Gwadar-Nawabshah LNG terminal and pipeline project.

35. MoU with respect to cooperation between Wapda and CTG.

37. Facility operating agreement for Dawood Wind Power project between ICBC and PCC of China and HDPPL.

38. Framework agreement for promoting Chinese investments and industrial parks development in Pakistan between ICBC and HBL on financial services corporation.

39. The financing term sheet agreement for Thar Block –I between ICBC, SSRL.

49. Agreement on collaboration on the establishment of NUML International Center of education (NICE) between NUML Pakistan and Xinjiang Normal University, Urumqi, China.

On this occasion the two leaders inaugurated the following projects by unveiling the plaques:

4. A demonstration project of DTMB Broadcasting in Pakistan.

8. Metro rail transit system on the Orange Line in Lahore.