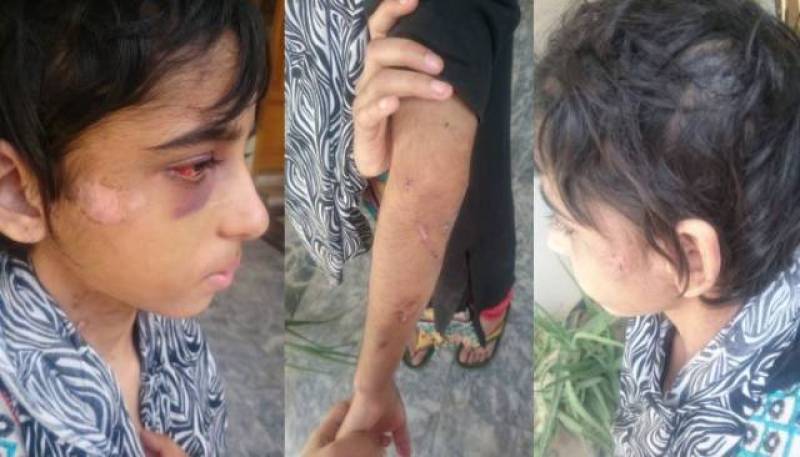 RAWALPINDI – Punjab police have registered a case against a couple for torturing an 11-year-old maid at their home, a day after the child shared her ordeal in a disturbing video.

Kinza Bashir, was working at the house of Ammara Riaz, an Army major, and her husband Dr Mohsin in Rawalpindi where she was repeatedly beaten and denied basic rights.

In the video, the girl even confessed to stealing food because she wasn’t fed by the family. “They would hit me for stealing biscuits and nimco. I would steal it because I was hungry,” she said.

The child says she was kicked often, and sometimes her woman employer would even stand on her. “If I were sleeping, they would wake me up and hit me.”

ISLAMABAD - Minister for Human Rights Dr Shireen Mazari has taken notice for the safe custody of a minor domestic ...

Kinza was rescued by the Child Protection Bureau after her father, a native of Faisalabad, took her to Airport police station, but policemen did not register a complaint against the army officer. They even forced the father to take her injured daughter back to their hometown, Sumandari.

However, the child maid’s images and statement on social media went viral, in which the child is seen showing wound marks on her face, arms, neck and head, which she said received at the hands of her employers.

According to initial medical report, the child was tortured periodically and carries wound marks all over her body. She also had a wound on her head, which needed three stitches.

Subsequent to the video of Kinza narrating her experience of torture was shared on social media, Minister of Human Rights Shireen Mazari took notice of the incident stating on Twitter: “We will be following it to ensure FIR registration and further action. Child is Kenza Bashir. Her father initially denied violence happened. Now an ASI has been suspended for wrong investigation."

Later, in another tweet, Mazari revealed that the child’s father was even ‘forced’ to sign an affidavit saying that Kinza got injured after falling from the stairs.

We have to ensure that such tactics do not prevent doing an indep medical examination and registering an FIR. The professional typing of the Affidavit is notable! https://t.co/2eIH6XYL3T

The couple are yet to be taken into custody, Rawalpindi police chief Abbas Ahsan said in a press conference on Sunday. Police have been keeping in the loop the military, who will decide whether this case will be conducted under Army act or the culprits be handed over to the police.

The CPO also confirmed the suspension of the cop who did not register a case against the child’s employers, vowing strict action against him.

The victim’s family members have also been made part of the probe, with the police suspecting that they forced her into slavery or bonded labour.

Kinza’s case is similar to that of another child, Tayyaba, who worked at the house of a judge.

ISLAMABAD - The Islamabad High Court sentenced a former judge and his wife to one year in prison, in the Tayyaba ...

In 2017, an additional district and sessions judge and his spouse were convicted of burning their maid’s hand over a missing broom, beating her with a ladle, detaining her in a storeroom and threatening her with even worse. Their one-year prison sentence was later enhanced to three years by Islamabad High Court.