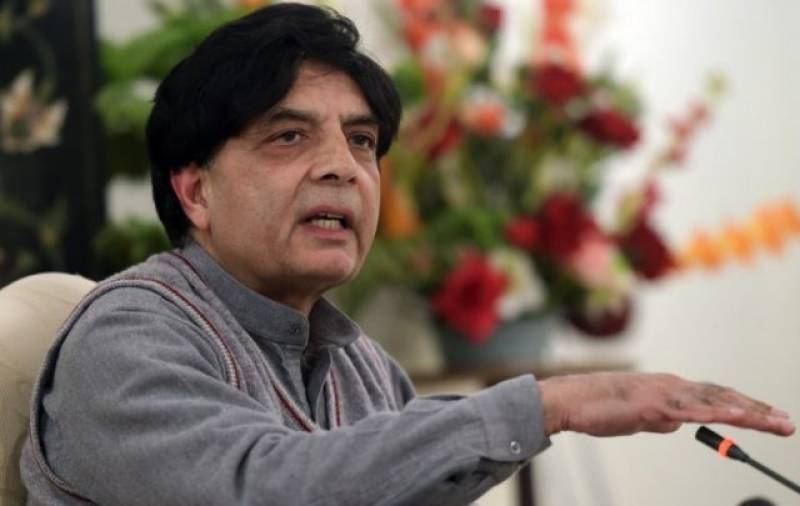 Speaking at a presser, Nisar denied comments attributed to him relating to former premier Nawaz Sharif. He said that he had issued a rebuttal of the fake news reported on media a few days ago.

"The comments that 'Mian sahib won't be able to show his face' and that 'there are 10 flaws in the PTI and a hundred in the PML-N' were attributed to me," Nisar said and added that he never made such comments.

He admitted that he had definitely said that he intended to explain his differences with the former premier at a public meeting in Chakri.

"I am not angry with party leadership but disagreed with some of their opinions" Nisar added.

The former security czar asserted that Nawaz Sharif was responsible for the party matters, adding that he voted for Nawaz' presidency of the party with a heavy heart.

"I stood with the party on legislation and told Shahid Khaqan Abbasi that he would not join the cabinet", said the politician.

"I had said that I would not speak [about my differences] because of Begum Kulsoom's condition," the disgruntled PML-N leader said.

Nisar expressed that he still belongs to PML-N, workers and parliamentarians group, adding that he controlled his emotions over controversial reserved seat issue issue and the Senate elections.

'I am in politics for respect,' observed the Pindiite and added that he had not rebelled against PML-N.

He continued that his disagreement was for the benefit of the supreme leader of Pakistan Muslim League Nawaz, Nawaz Sharif.

On the issue of party tickets, the politician noted that he never appeared before any panel for interview and would not do so in future.

The seasoned political figure fell short of disclosing the reason behind his electoral campaign as an independent candidate and clarified that he would hold another press talk in this regard.

He also recounted the efforts made for the party and expressed that Pakistan Tehreek-e-Insaf had publicly invited him to join the party.