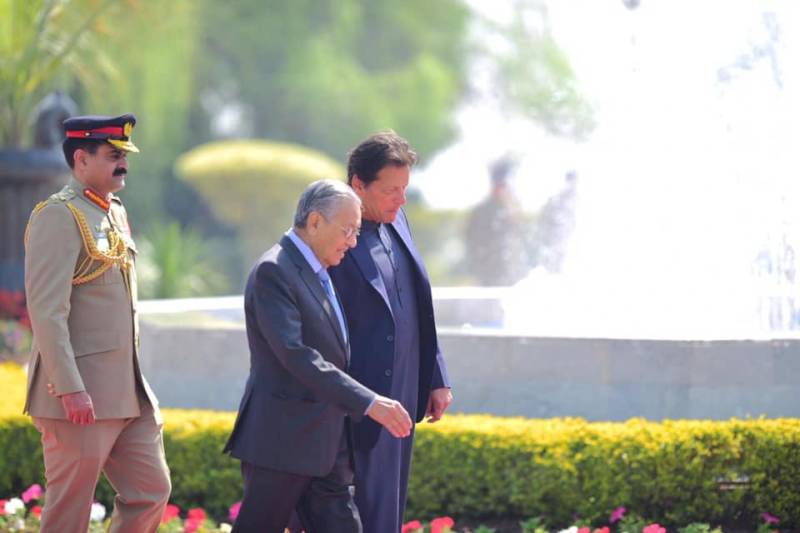 ISLAMABAD - Malaysian Prime Minister Mahathir Mohamad concluded his three-day visit to Pakistan and departed back on Saturday after attending the National Day Parade.

Prime Minister Imran Khan saw the Malaysian premier off at the Nur Khan Airbase after the visiting premier attended the National Day Parade in Islamabad as a guest of honour.

Ahead of his departure, Mahathir Mohamad was given a briefing on JF-17 Thunder fighter jets.

During his stay, the Malaysian premier held meetings with Pakistan's top civil and military leadership and signed multiple MoUs.

On Friday, Mahathir Mohamad was conferred the highest civil award Nishan-e-Pakistan at an impressive investiture ceremony held at the President House in Islamabad.

Addressing a banquet in honour of the Malaysian premier, President Arif Alvi said Pakistan and Malaysia enjoy brotherly relations which can be further cemented.

Pakistan is celebrating the national day with traditional zeal and fervor. The day is celebrated throughout the country to mark the signing of the Pakistan Resolution by the All India Muslim League in 1940 at Lahore’s Minto Park. The resolution demanded a separate homeland for the Muslims of the subcontinent.