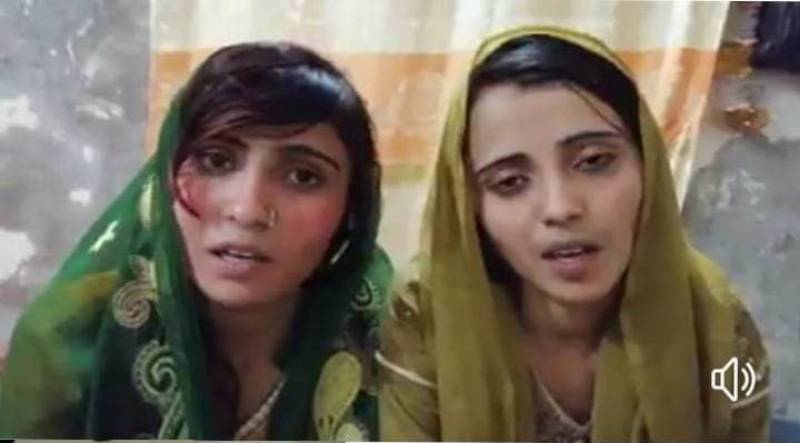 BAHAWALPUR – Two Hindu minor girls, who were allegedly abducted and forcefully converted to Islam, approached a court in Bahawalpur on Sunday seeking protection.

The father and brother of the girls in videos — circulating on social media over the last two days — said that the two sisters were abducted from Daharki in Ghotki district of Sindh and forced into changing their religion from Hinduism to Islam before they were subjected to underage marriages.

#Reena 14 & #Raveena 16 claiming they will fully accepted Islam. This can't be an excuse for Police. Cant ignore both girl are underage, were illegally married after conversion & both could be under immense pressure. For more on Forced conversions read https://t.co/7gT9vigqnz pic.twitter.com/vp6T2MzPtj

However, a separate video of the girls has also been making rounds, in which they said that they accepted Islam of their own free will.

Earlier today, according to Geo News, the teenage sisters in question approached a court in Bahawalpur seeking protection, in a baffling twist of events that appears to contradict the family’s claims of their abduction.

Police have meanwhile arrested a man from Khanpur who is suspected to have assisted in the nikah (marital contract) of the girls.

The development comes after Prime Minister Imran Khan ordered the Sindh and Punjab governments to work together to recover the girls.

In a Twitter post, Information Minister Fawad Chaudhry informed that Prime Minister Imran had issued directives to the Sindh chief minister to look into reports that the girls in question have been taken to Rahim Yar Khan.

In his tweet, Chaudhry further said that Pakistan's minorities represent the white part of Pakistan's flag and that "we love all our colours and the protection of our flag is our responsibility."

Chaudhry added that the Human Rights Ministry had been "asked for an inquiry".

Lawyer and activist Jibran Nasir was among those who raised the issue on Twitter, sharing a video which he said was of the two sisters, one aged 14 and the other 16.

Family of Reena and Raveena who were forcefully converted to Islam registered FIR with local police for "abducting to compel to marriage". Age in FIR is 14 & 16. Under Sindh Child Marriages Restraint Act every citizen under 18 falls under definition of child and cant be married pic.twitter.com/RN2RpjPATB

In the video, a cleric can be seen next to the girls and two men who they were married to. The cleric says the girls were inspired by Islam and alleges that their family is spreading "false propaganda" and is threatening their lives.

Nasir said the sisters were converted at the Dargah Barchundi Sharif. "As per Dargah, girls wanted to convert to Islam since long influenced by its teachings, but first act after conversion was underage marriage," he said. The girls were reportedly taken to Rahim Yar Khan following their marriages.

Nasir also shared a copy of a first information report dated March 20, which was registered by the girls' family against their alleged forced conversion to Islam.

Most Hindu families in Pakistan live in Sindh and according to media reports, some 25 forced marriages take place every month in the Umerkot district.