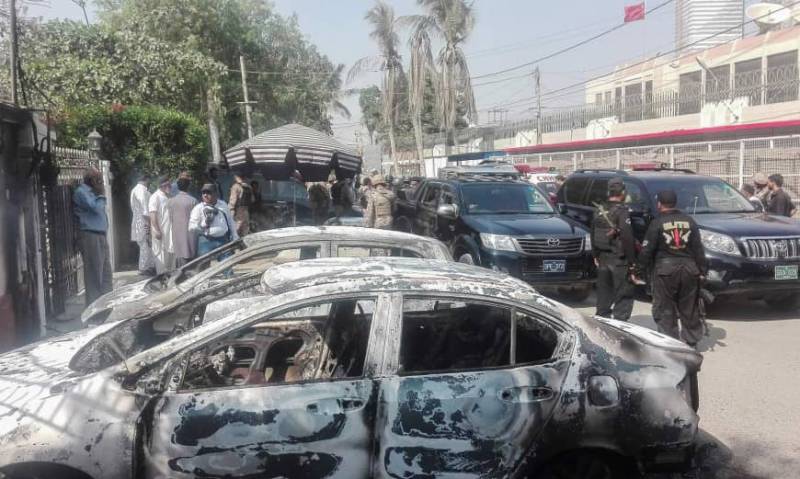 The video shows three militants being trained somewhere in a mountainous region; the trio can be seen toeing the line of New Delhi in expressing their unfounded grievances against Pakistan.

#BREAKING: Baloch Liberation Army releases video of three of their armed fighters who were killed while attacking Chinese Consulate in Karachi, Pakistan today. All three men are well-educated and speak fluent English while threatening China and Pakistan against evil designs. pic.twitter.com/fsY7IO1ffj

BLA had claimed responsibility for the attack on Chinese consulate in Karachi on Friday in which two policemen and two civilians lost their lives, however, its Twitter account was suspended a few hours after the attack was foiled.

The three militants in the video were finally shot down by the valiant Pakistani forces in the operation.

All staff of the consulate, comprising around 25 people, remained safe in the attack as Rangers and police foiled the terror bid successfully.

Three armed men, who were on a vehicle, hurled hand grenades in the area followed by firing, targeting the security officials deployed at the Chinese consulate.

The cross-firing between the assailants and the security official continued for some time when heavy contingent comprising Rangers and police covered the area quickly responding to the situation.

Security experts in Pakistan claim that BLA has links with India and the unholy collusion is behind the subversive activities in Pakistan.

Another vindication of BLA’s connivance with India is the arrest of Kulbhushan Jadhav – an Indian spy arrested from Balochistan.

Karachi Police chief Ameer Sheikh said that all the three attackers were also killed in the retaliatory firing, adding that suicide jackets and other weapons were recovered from the terrorists. He also confirmed that the attackers could not enter the consulate.