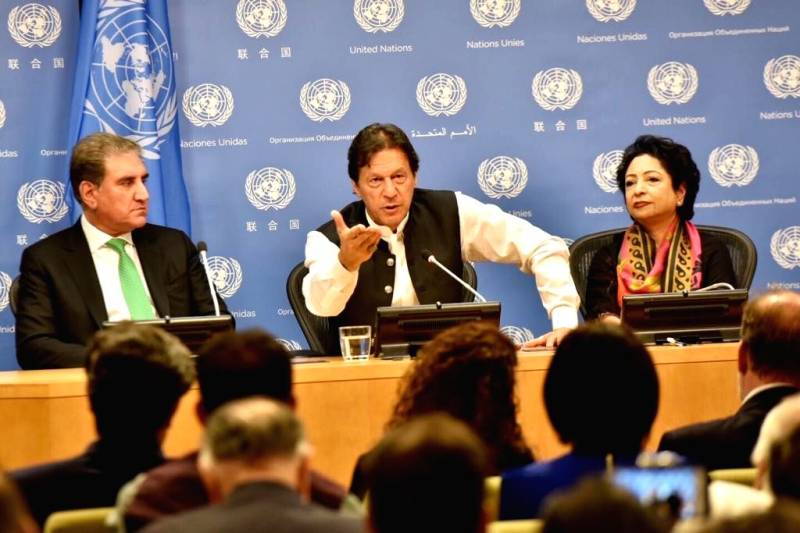 NEW YORK - Prime Minister Imran Khan has urged the United Nations (UN) and the international community to push India into lifting the ongoing curfew in occupied Kashmir under which some eight million people are languishing for the past 51 days.

Addressing a news conference along with Foreign Minister Shah Mahmood Qureshi and Pakistan's Permanent Representative to the UN Dr Maleeha Lodhi in New York, the prime minister warned the situation could get worse if urgent efforts were not made to resolve the crisis.

Expressing his disappointment over the international community’s attitude, the prime minister said there are eleven Security Council resolutions that recognize Kashmir as a disputed region and it is not an internal matter of India.

Imran Khan brushed aside the possibility of any talks between Pakistan and India unless and until the latter lifted curfew in the Indian Occupied Jammu and Kashmir.

He said Indian Prime Minister Narendra Modi has now boxed himself into a blind alley by his August 5 decision to revoke the special status of held Kashmir, with no way out, and a whole population turned against India.

Prime Minister said any conflict between nuclear-armed neighbours would not be confined to the South Asian region, adding that the whole world will be affected.

He said India today is governed by a racist, Hindu supremacist group, Rashtriya Swayamsevak Sangh, responsible for assassinating Mahatma Gandhi and two thousand Muslims were butchered in Gujarat when Modi was the chief minister.

Imran Khan said in India, minorities including Muslims and Christians were not safe and were treated as inferior citizens.

Imran Khan feared that change of demography by India in the occupied Kashmir and also the massacre of Kashmiris by 900,000 Indian troops after lifting of the curfew, the Radio Pakistan reported.

Replying to a question regarding possible mediation efforts by Pakistan in the Gulf crisis, he said President Trump asked me if we could be helpful in deescalating the evolving situation in the region.