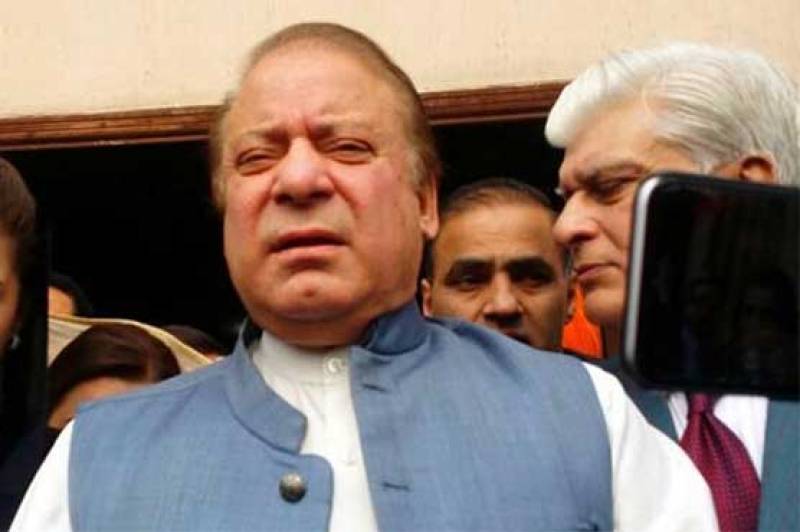 ISLAMABAD – Former prime minister Nawaz Sharif will soon be released on bail for six months after the Supreme Court accepted his petition on medical grounds on Tuesday.

The former PML-N supremo, who has been directed to submit two surety bonds, each worth Rs 5 million, is not allowed to leave the country.

Due to limited seating in Court no.1, special passes were provided to regulate the entry in court house while lawyers, petitioners, parties and journalists were allowed to witness the hearing.

ISLAMABAD - The accountability court in Islamabad has issued the detailed verdict of the Al-Azizia reference filed ...

Nawaz Sharif is undergoing seven-year imprisonment in the Al-Azizia Mills corruption case. The government claims that he is not ready to be treated in any hospital in the country as he wants to go to London for treatment. The PML-N has accused the Pakistan Tehreek-i-Insaf government of indulging in politics over Sharif’s health.

The former premier spent around 10 days in Jinnah Hospital, Lahore, last month. He refused to get further treatment at the hospital after the IHC rejected his petition seeking suspension of his sentence on medical grounds.

During the hearing on the bail plea, the Chief Justice asked Sharif's lawyer to prove that his client's health is worsening keeping in view the fact that his medical condition dates back to 2003 while he was sentenced in 2018.

"You want Nawaz Sharif's bail. We can order his treatment from any hospital of his choice in Pakistan," the CJP was quoted by TV channels as saying.

When Khawaja Haris refereed to a letter of Nawaz Sharif's physicist Dr Lawrence, the Chief Justice asked him to explain the legal status of the letter.

He said how can the letter be produced as evidence when it was not addressed to the court.

He said Dr Lawrence's letter was written to one Adnan, which is a private communication between two individuals.

"Nawaz Sharif's reports say he is suffering from heart disease but we want to know whether his life is in danger.

Tell us how is his situation different from his medical history. How is his health worsening," the CJ was quoted as having told the lawyer.

The NAB prosecutor, however, opposed the the bail plea saying Sharif has no life threatening illness.

The IHC on February 25 had dismissed Nawaz’s petition seeking bail and suspension of seven year sentence in Al-Azizia reference on medical grounds.

During the last hearing on March 19, headed by Chief Justice Asif Saeed Khosa, a three-judged bench had summoned a response from National Accountability Bureau (NAB).

Yesterday, the NAB submitted a petition opposing Sharif's bail petition and asked that it be rejected.

The SC had issued a notice to NAB during the last hearing of the case asking it to make its stance known.

As per the accountability bureau's reply submitted on Monday, Sharif's bail petition contains no indication of him suffering from a fatal illness. NAB has stated that Sharif does not suffer from a life-threatening illness and no medical board has recommended that he undergo surgery.

It also argued that Sharif's case does not fall in the category of a 'hardship' case.

NAB has argued that Sharif wants to make the case that there is a threat to his life and he should be allowed to proceed abroad. It added that the former premier is being given all facilities for treatment.

The accountability watchdog said that if Nawaz is given bail, the former premier will remove himself from the jurisdiction of the court. It said that the IHC had reviewed all these aspects earlier and subsequently rejected Sharif's bail request.

Additionally, NAB has contended that Sharif's doctor, Dr Lawrence's report looks like it is "unverified and fictitious".