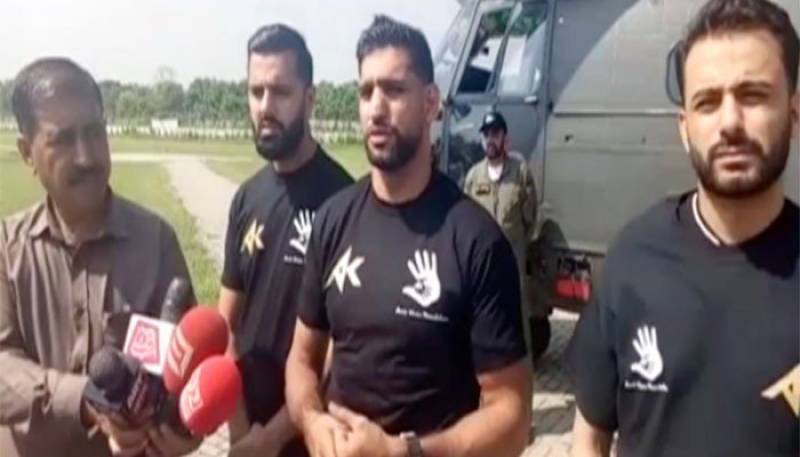 ISLAMABAD – British Pakistan boxer Amir Khan visited the Line of Control on Tuesday as part of a ‘humanitarian visit to raise his voice for peace’, during he met the families affected by India’s ceasefire violations and to express solidarity with the people in occupied Kashmir.

Khan told the local media he wanted to highlight the plight of Kashmiris besieged in the occupied valley since August 5, when India revoked the region’s special status and cut off all communications there.

“People are being tortured and children are being killed,” he said, adding, “I was watching all of this on my television in Britain, but I could not stay silent.”

Pledging to help the victims of Indian brutalities with funds from the Amir Khan Foundation, Amir Khan said that he will continue to raise his voice against the brutalities of Indian occupation forces in Kashmir.

“I will tell people back in Britain about the situation here,” Khan said.

The boxer added that Azad Kashmir was peaceful and people in Azad Kashmir were free to go about their daily lives. “Whereas in occupied Kashmir, people are living in fear and under siege,” he lamented.

Khan further called on celebrities worldwide to raise their voice in support of Kashmiris.

Earlier this week, Amir took to Twitter to announce plans of his visit to the Pakistan side of the LoC.

I’m visiting Pakistan, Line of Control( LOC), to make my voice heard, bring greater awareness to the terrible situation in Kashmir and call for peace @UN charter Thank you @officialdgispr for the opportunity

Khan had described the situation in IoK as ‘terrible’, and wanted to visit the LoC to highlight India’s callous measures and human rights abuses.

He had also expressed his gratitude toward the Pakistan Army for organising his visit to the country.