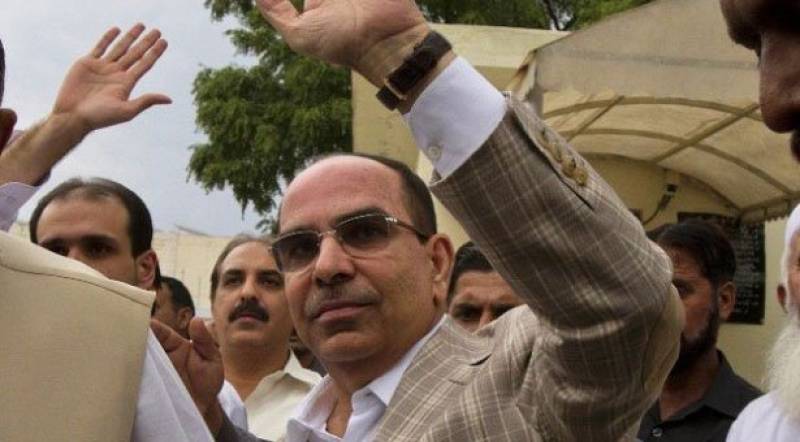 ISLAMABAD - The Supreme Court asked the National Accountability Bureau (NAB) not to take any action against Bahria Town after its chairman, Malik Riaz , until it rules on a review petition.

On Wednesday, a three-member apex court bench announced the verdict in favour of Bahria Town and its owner Malik Riaz.

The real estate tycoon appeared before the court and submitted that he holds the apex court in high esteem.

Mr. Riaz agreed in writing to deposit 20 per cent of the amount in the court.

In addition, Bahria Town has been asked to file monthly audit report of its accounts.

Malik Riaz told the court that "nobody can raise a mega city in such a short span of time." To this, CJP Nisar assured Malik Riaz that justice would be done with him.

Malik assured the chief justice that he will obey the court orders; however, he requested him not to pass such an order that might affect his employees.

Yesterday, the chief justice had asked Malik Riaz to deposit Rs20 billion with the court. Malik, however, requested him to reduce the amount to Rs5 billion. The CJP then asked him to submit the amount within two weeks and come up with an affidavit and suggestions on Wednesday (today) and adjourned the hearing.

The review petition in question was filed by Bahria Town against three cases in which the apex court had found massive irregularities in land acquisition by the developer for its housing projects in Karachi, Rawalpindi and Murree.

Earlier, during the course of the hearing, Malik Riaz told the chief justice that he had planned projects in those areas where people were reluctant to invest owing to lack of adequate security measures. The 64-year-old said his housing projects included the world's third largest mosque as well as an old-age home, a zoo, schools, and other facilities.

The chief justice told him that life in the hereafter was better and more enduring and he should pay his attention in this regard.

Malik Riaz assured the chief justice that he will ensure his presence in the court whenever he was summoned.