Nisar gives six-month deadline for re-verification of all CNICs 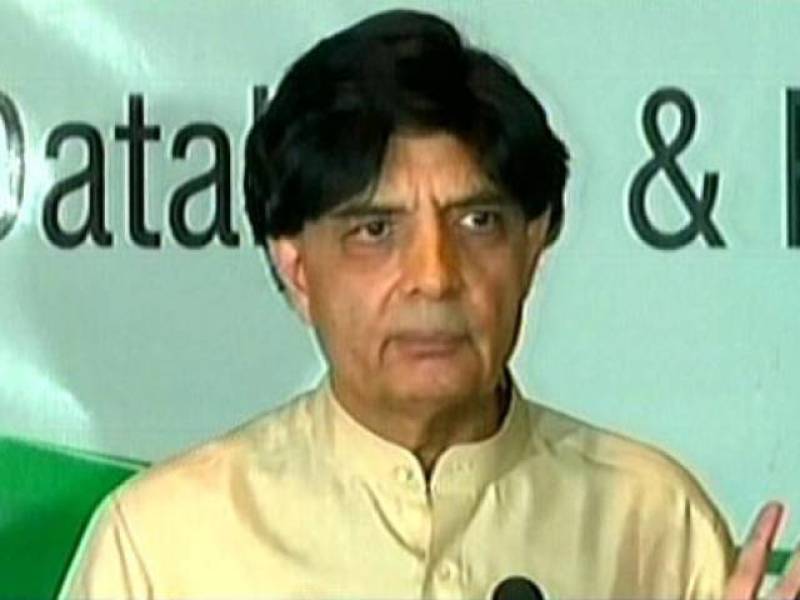 ISLAMABAD (Web desk) - Interior Minister Nisar Ali Khan on Friday said that the Computerized National Identity Cards (CNICs) of all Pakistani citizens would be re-verified within the next six months, and warned holders of forged ID cards with jail time of up to seven years.

The move comes in on the back Afghan Taliban leader Mullah Akhtar Mansour's killing in a drone strike earlier last week. Mansour was said to be carrying a valid Pakistani CNIC and passport, bearing multiple visas and entry/exit stamps for various countries, when he was hit by the drone.

While speaking to media at the NADRA headquarters, Nisar said that the re-verification drive would rely on the heads of over 25 million families in Pakistan for help in expunging imposters from their family trees.

He gave holders of fake ID cards a 2-month deadline to surrender their cards, or else face a seven-year jail term once this deadline lapses.

"Government officials involved in issuing the fake ID cards will be sent to jail for 14 years for not identifying people who obtained fake IDs through them," Nisar warned.

“I will personally monitor the exercise and nobody will be spared," he said. He said a helpline would be set up for citizens to help authorities identify foreigners with fake Pakistani identities.

The interior minister said rewards would also be given to the citizens for providing information on foreigners.

Nisar said the passport of Mullah Mansour was issued in 2001 and would have been caught if it had been brought for verification.

The interior minister also announced that 16 director generals (DGs) had been sacked from the NADRA.

“Now only 10 DGs will serve in NADRA,” he said. The minister called on the civil society, media and judiciary to support the government in its re-verification initiative.

Earlier this week, Nisar admitted he was unaware how Mansour obtained original Pakistani documents under a different name, which are issued by the National Database Registration Authority (NADRA) and the Directorate General if Immigration and Passports, both departments of the Interior Ministry. However, he identified the existence of corrupt officials as a possible reason for why Mansour was able to obtain valid Pakistani documents.