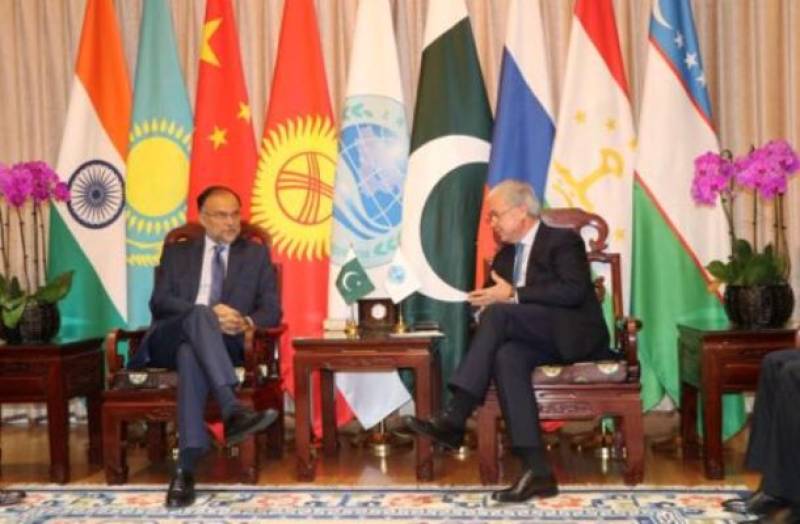 Iqbal, who also holds the portfolio of Minister for Planning, Development and Reform, stated this during a meeting with SCO Secretary General Rashid Alimov at its headquarters on the sidelines of the Interpol General Assembly meeting in China.

Welcoming the federal minister, the Secretary General appreciating Pakistan's membership of SCO, which it achieved in June this year, said that the expansion of the organization has given a new momentum and strength to work for the development of the region.

The minister thanked the Secretary General for supporting Pakistan in getting membership.

He underlined that with deep-rooted historical and cultural links as well as strong economic and strategic goals, Pakistan was poised to play a greater role for peace, security and development of the region. He assured the Secretary General of Pakistan's support in his endeavors.

On September 26, Ahsan Iqbal attended the opening ceremony of 86th General Assembly of Interpol, He reaffirmed Pakistan’s commitment to cooperate for peace and security at regional and global levels, adding that Pakistan was following an inclusive developmental agenda.

He highlighted that Pakistan has achieved significant success in eliminating the menace of terrorism during the last four years and is willing to share its experiences, which it has learnt during the war, with the international community.

He stressed on a need of a collaborative approach to defeat terrorism and other crimes.

Ahsan Iqbal said China-Pakistan Economic Corridor (CPEC) will usher economic opportunities that will be helpful in bringing peace and development to conflict-hit region.

Pakistan had secured full membership of the SCO in June 2017, which was announced by Kazakh President Nursultan Nazarbayev in his inaugural speech during the 17th SCO summit.

Prime Minister Nawaz Sharif, addressing the summit, said, "The SCO goals resonate with Pakistan's national ethos, and so do the core values of the Shanghai spirit and the SCO charter with our own quest for peaceful neighbourhood."

He had also thanked the founding members including China, Russia and others for their staunch support to Pakistan.

"As leaders, we should leave a legacy of peace and amity for our future generations, not a toxic harvest of conflict and animosity. Instead of talking about counter-weights and containment, let us create shared spaces for all," PM Nawaz urged SCO heads of state.