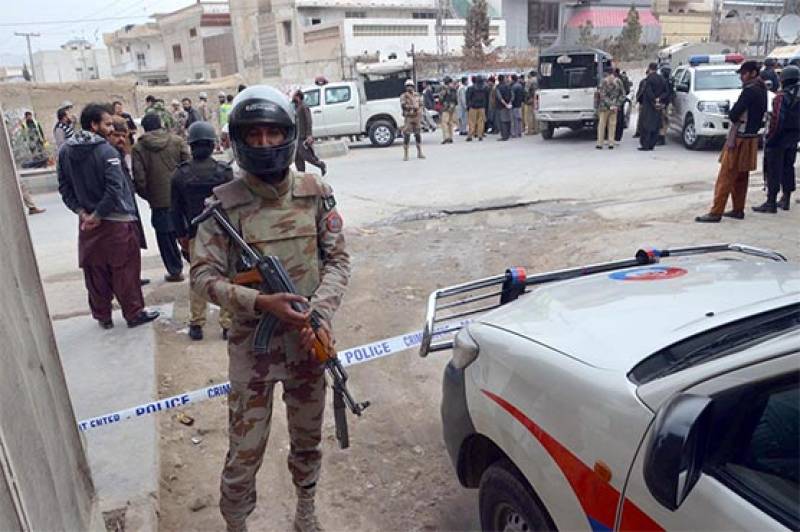 QUETTA - At least four security personnel were martyred and six others injured in a suicide attack near Quetta on Wednesday evening.

The explosion took place in Nauhisar area on the outskirts of the provincial capital, while police and security personnel were conducting a search operation in the vicinity, reported Geo News.

The injured were shifted to nearby hospitals for treatment.

The blast targeted a Frontier Corps (FC) check post in the Darvish Belili area of the provincial capital. There were also reports of firing in the area soon after the blast.

The exact nature of the blast could not be ascertained as yet, however, a security official told DawnNews that "it seems to be a suicide attack".

A heavy contingent of police, Levies and Frontier Corps personnel have reached the site of the blast.

The injured have been shifted to Civil Hospital Quetta for treatment, where emergency has been imposed.

Police and security officials are often targetted in the Balochistan capital.

Four security personnel were martyred on Feb 14 when they were attacked near the city's Sariab Road area. Police said unidentified attackers, riding a motorcycle, targetted a motorcycle patrol of the Frontier Corps (FC) while it was on routine duty along with a railway track.

Similarly, a police constable was shot dead by unidentified attackers on the city's Raisani Road on January 16.

A day earlier, on Jan 15, five Pakistan Army soldiers were killed in Kech, Balochistan when their vehicle turned turtle after it was fired at.

On Jan 9, four Balochistan Constabulary personnel were among six killed in a suicide attack near the Balochistan Assembly.

Meanwhile, on Jan 2, at least five people, including two FC personnel, were injured as a result of a gun and bomb attack on a check post in the Baleli area of the provincial capital, said security sources.