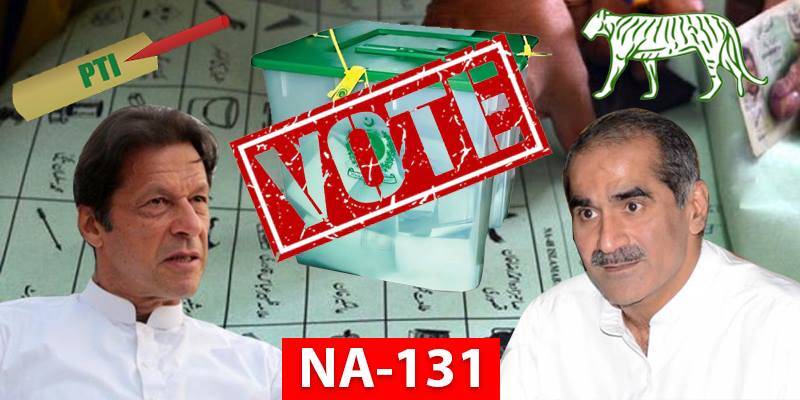 ISLAMABAD - Pakistan Tehreek-e-Insaf (PTI) Chairman Imran Khan has been declared the winning candidate from NA-131 after recounting of 2,835 rejected votes.

Imran Khan emerged as the winner again by 602 votes after the results were challenged by the runner-up candidate, Khawaja Saad Rafique of the Pakistan Muslim League-Nawaz (PML-N).

However, Returning Officer Muhammad Akhtar Bhangoo rejected the application of Khawaja Saad Rafique for complete recounting of polled votes in the constituency.

The Election Commission of Pakistan (ECP) on Saturday initiated a process of recounting the votes in disputed constituencies across the country.

In NA-126, the ECP has declared Pakistan Tehreek-e-Insaf's (PTI) Hammad Azhar as the winner after the recounting. However, the recounting of votes in the major constituency, NA-131, where PTI chief Imran Khan defeated Pakistan Muslim League-Nawaz's (PML-N) heavyweight candidate Khawaja Saad Rafique, is underway.

On Friday, the Returning Officer approved the plea, which challenged his opponent Imran Khan’s victory in NA-131 Lahore 9 constituency.

Rafique, who lost to the PTI chairman in the constituency in Wednesday's polls, had filed a complaint with the returning officer alleging that the presiding officer deliberately rejected hundreds of votes.

The RO, Muhammad Akhtar Bhanggu had ordered for a recount in the constituency.

According to official results released by the Election Commission of Pakistan, Imran Khan has defeated Khawaja Saad Rafique in NA-131 after bagging 84,313 votes. In what was a tough-contested poll, Khawaja Saad obtained 83,633 votes.

Preliminary poll results released by the Election Commission of Pakistan show the PTI leading the National Assembly tally with 115 seats. As PTI workers from across the country celebrated the results, the outgoing PML-N and other parties rejected the results citing "outright rigging" and accusing officials of preventing its representatives from overseeing the count.