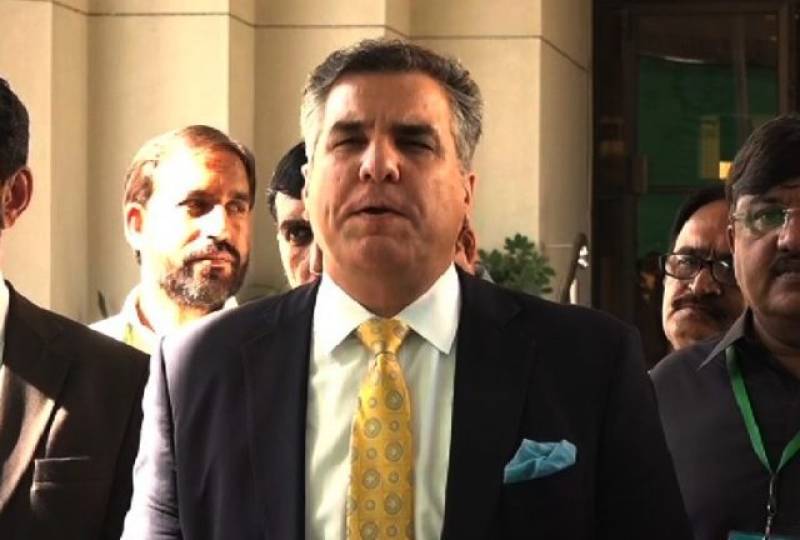 A three-member bench headed by Justice Azmat Saeed and comprising Justices Mushir Alam and Mazhar Alam Miankhel announced the verdict in the contempt case against the PML-N leader, facing charges of scandalising the judiciary during TV shows. Justice Mushir Alam read the verdict.

The former minister, following the verdict, is no more able to take part in upcoming elections from his hometown, NA-67 Narowal as he could not hold any public office for five years.

The court ruling states the PML-N leader has been convicted under Article 204 for maligning the court, making the judiciary controversial and interrupting justice.

Aziz's counsel announced that he would file a review petition against the apex court ruling.

A heavy contingent and armoured vehicles were deployed around the apex court in order to avoid any untoward situation.

Talking to media outside the apex court, the former minister denied the charges, adding that three allegations were leveled against him based on eight or ten months old happenings.

The first accusation was based on a press conference but the only witness in this charge admitted that the words were wrongly attributed to him, said Aziz, adding that he was acquitted in this allegation.

The convicted leader said that he was disqualified on the allegation based on remarks about the apex court verdict in Imran Khan’s disqualification case. He denied saying any objectionable words in the video presented as evidence.

“I ever made efforts to strengthen the institutions,” the PML-N stalwart said, adding that they did not attacked the court or lock down Islamabad after the verdict.

He lamented that he never violated any court orders like the former prime minister Yousaf Raza Gillani, also the leader of Pakistan Peoples Party (PPP).

He cited Gillani became prime minister after serving the jail term, while Asif Ali Zardari managed to get Presidency after conviction.

On February 2, the apex court issued a contempt of court notice to Aziz for his alleged anti-judiciary speeches.

On March 13, the top court formally indicted the federal privatisation minister. The court indicted the minister under Article 204 and contempt of court law 2003.

The apex court remarked that the federal minister has scandalised the judiciary, adding that Aziz intervened in court matters.

On May 3, the three-member bench reserved the verdict in the case.

At the final hearing, Prosecutor Rana Waqar had argued that remarks passed by Aziz were tantamount to an attack on the system of justice. He informed the apex court that the federal minister had referred to PTI chief Imran Khan's acquittal and Jahangir Tareen's disqualification as scripted. Aziz has also accused the monitoring judge in corruption references against Sharif family of orchestrating the cases.

To which, the accused minister said: "I respect the judiciary and cannot imagine of disgracing it". Daniyal further said that he had been holding the various top position in the country but there was no allegation against him. "All the life, I made efforts for the freedom of judiciary," he added.