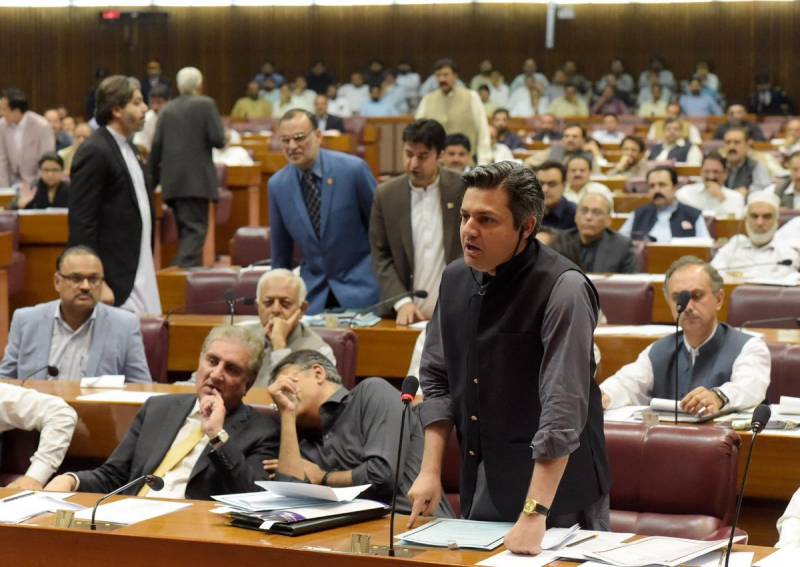 ISLAMABAD - National Assembly Friday passed the federal budget approving the finance bill 2019-20 to give effect to the financial proposals of the government.

The total outlay of the budget was Rs7.022 trillion, focusing on fiscal consolidation, revenue mobilization, austerity measures and protection to the vulnerable segments of society.

At the start of the proceedings, Minister of State for Revenue and Finance Hammad Azhar moved the motion to present the finance bill before the house for consideration and voting.

After voice voting on the motion to introduce the bill, the opposition challenged the vote and asked the Speaker for a head count.

One hundred and seventy six (176) members of treasury benches favoured the motion while 146 members of opposition opposed it.

After passage of the motion with majority vote, Minister for Revenue introduced the finance bill which was passed by the house with a majority of votes.

The amendments were related to changes in tax rates and finance bill, tax exemptions and abolition of interest on bonds.

While debating the amendments, Shahida Rehmani said the tax collected from Islamabad should be spent on the city for provision of drinking water and other basic facilities. She suggested changes in the income tax ordinance to benefit overseas Pakistanis who buy property abroad.

Abdul Akbar Chitrali said taxes on those providing professional services would burden consumers so it should be withdrawn.

Ali Pervaiz and Shagufta Jumani demanded that the tax relief given by the Pakistan Muslim League(N) government to the salaried class in its last year should be restored. Jumani said the consumers were paying sales tax on every item they purchase from the market.

Abdul Qadir Patel asked for tax exemption for teachers and researchers while Qaiser Ahmed Sheikh said tax should be reduced for cottage industry as the banks were not giving it loans.

Shazia Marri said she wanted concessions for Thar coal as was decided in a meeting of Economic Coordination Committee (ECC) in 2010. The Thar coal electricity projects should be exempted from taxes. The taxes would increase cost of coal production that in turn would increase power rates, she noted.

Dr Nafisa Shah proposed amendment in the income tax ordinance 2001 saying delay in tax refunds blocked investment and it was unconstitutional to ask exporters to take bonds instead of refunds.

The treasury benches rejected almost all the amendments to the finance bill moved by the opposition members after discussion on them by both sides. While amendments moved by Minister for Finance and Revenue were adopted by the house.

Prime Minister Imran Khan along with federal ministers of PTI and allied parties sat through the session spread over many hours while opposition led by Shehbaz Sharif and Bilawal Bhutto Zardari attended the session with full strength.

During the voting, Speaker NA Asad Qaiser on various occasions urged the members to refrain from raising slogans, observe decorum of the house and desist from making videos from their mobile phones.

At times, the members from across the aisle squabbled over rules according to which the Speaker runs the house.