CNN reporter arrested live on air while covering protests in US 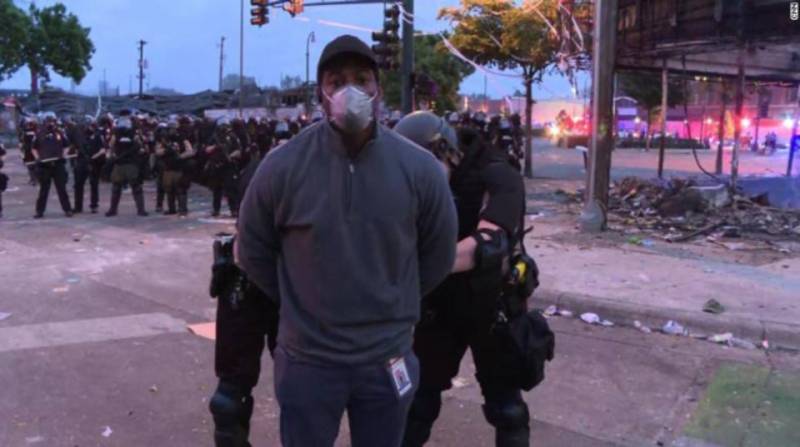 MINNEAPOLIS – A CNN reporter and his team was arrested during a live television report on Friday when he was covering ongoing protests erupted in the US over the death of a black man in police custody.

The death of George Flyod sparked protests across the US and they turned violent on Thursday night into Friday morning in several states.

Police detained CNN correspondent Omar Jimenez, his producer and his photojournalist shortly after 5 a.m. CT (6 a.m. ET) as Jimenez was reporting live from a street south of Minneapolis, near where a police precinct building was earlier set ablaze, said a CNN report.

A police officer handcuffed Jimenez, who can be seen showing his CNN badge to the officials, despite conveying the security official that his team would move the place wherever they needed them to.

"We were just getting out of your way when you were advancing through the intersection," Jimenez continued.

The CNN crew was taken to city's downtown public safety building, but they were released later.

Jimenez went live again after his release when he said: "We're doing OK, now. There were a few uneasy moments there".

The Minneapolis State Patrol in a tweet said, "In the course of clearing the streets and restoring order at Lake Street and Snelling Avenue, four people were arrested by State Patrol troopers, including three members of a CNN crew. The three were released once they were confirmed to be members of the media."

CNN also corrected he police statement on Twitter as saying, "This is not accurate -- our CNN crew identified themselves, on live television, immediately as journalists. We thank Minnesota @GovTimWalz for his swift action this morning to aid in the release of our crew."